There appears to be quite a bit of updates going on with the ExtPlane plugin source code in the last few months, and it turned out some of these are needed to fix some of the bugs I am facing when using it. Unfortunately, to get the latest and greatest version, you have to compile it yourself. Here are my notes on how to go about compiling the plugin on Linux and Windows.
Note: If you are using my Pi-XPlane-FMC-CDU, you can just use the pre-compiled binaries linked to in my post here. This post is more for those who would like to know more about the compilation process, and/or want to compile it themselves.
Compiling for Linux
I was able to compile it for Linux quite easily, on my Ubuntu 16.04 desktop PC. Starting with a fresh Ubuntu install:
Compiling for Windows
The last time I actually compiled anything for windows, the compiler had the name "Borland" in it 😃. But since my proper X-Plane Flight Sim setup runs on a dedicated WIndows PC, I need a WIndows ExtPlane plugin also. After a few false starts (Visual Studio Community Edition ... 😓), here are my notes on setting up a Linux-ish Windows build environment as well as compiling the ExtPlane plugin.
These notes are for a Fresh Windows 7 (fully updated) with just a Chrome browser installed. 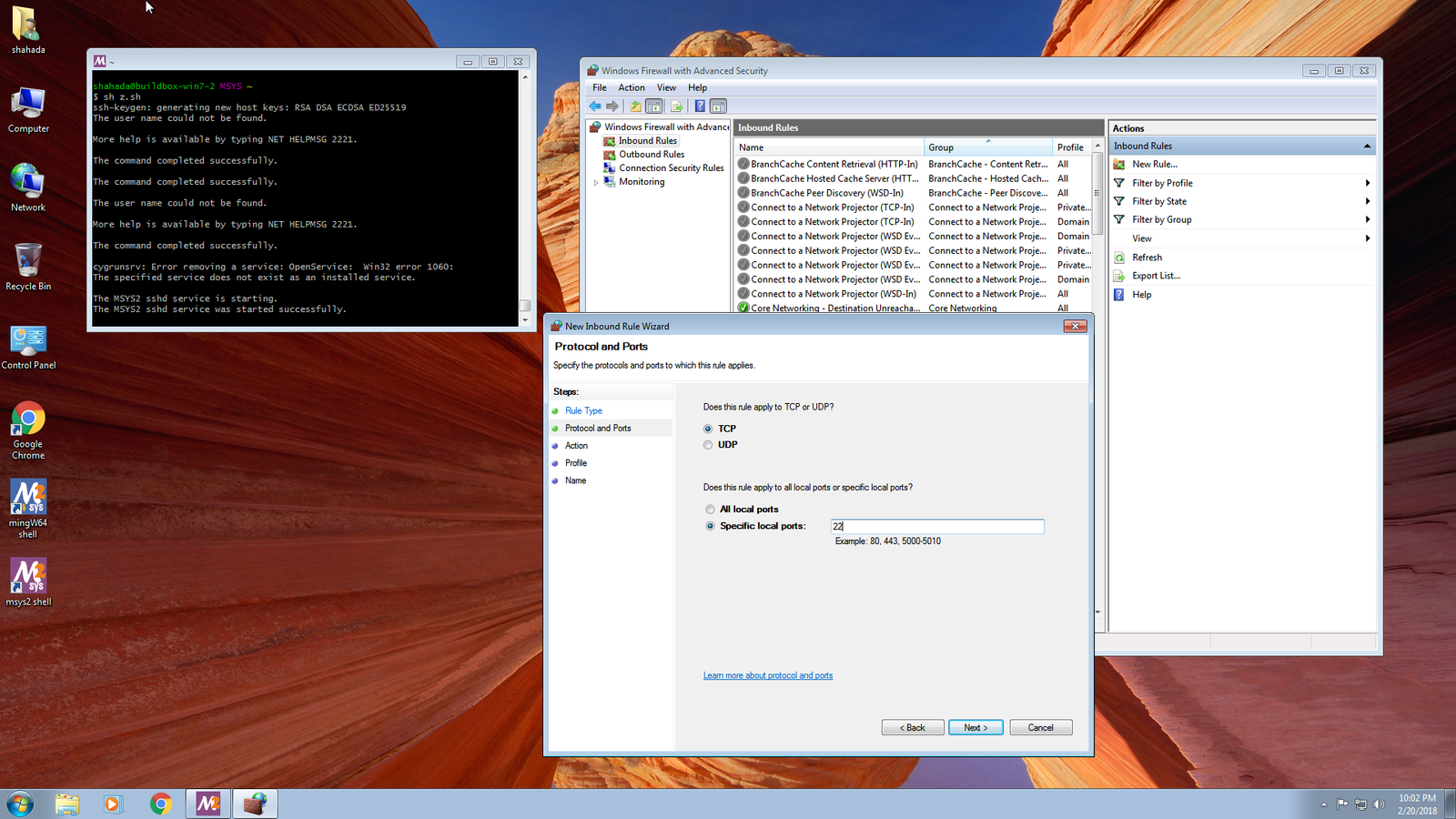 Now we are ready to build the Windows version of the ExtPlane plugin. The instructions below download the XPlaneSDK and ExtPlane git repository (what I actually did was to share the "src" folder from my Ubuntu machine (using Samba) and mounted it as "s:" on the Windows machine).
We now have the windows version of the plugin in the extplane-plugin/extplane/64/win.xpl, which is actually just a renamed .DLL file. However, this .DLL has dependencies on other .DLLs, and won't be able to run under x-plane if those other .DLLs are not present. To see those dependencies, install the Dependency Walker utility, and open the win.xpl file with it (Actually you are supposed to be able to use the "ldd" command for this, but it didn't work on this .dll for me). It will list the dependent .dll files: 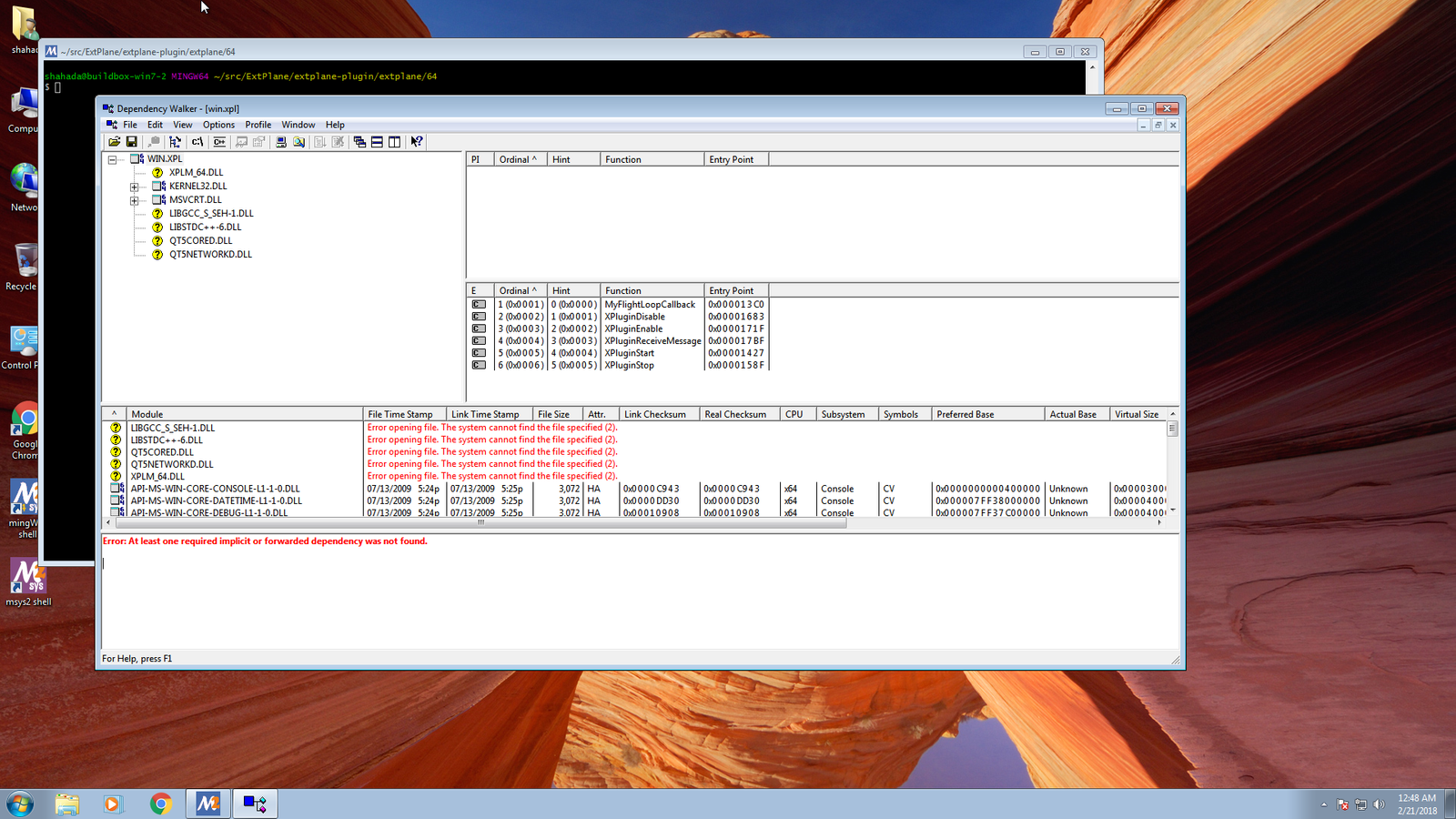 Tthe fun doesn't end there. Those dependent DLLs you copied in, also have their own dependent DLLs, so you will need to go through each one and find their dependencies, and then go through each of those, and so on. One thing that may help is to add the extplane-plugin/extplane/64/ folder into the Dependency Walker's path, so only those that are really missing will turn up in yellow. It can be frustrating, but almost everything you need will be somewhere in the /mingw64/bin folder.
For this build of ExtPlane, here are the dependent .DLLs I found:
Copy them to the same folder where the plugin is located (~/src/ExtPlane/extplane-plugin/extplane/64/). I'm not sure if all of them are strictly needed or not.
Compiling for Mac OS X
Send me a Mac and I will write this part up! 😍
Putting it all Together
Copy the src/ExtPlane/extplane-plugin/extplane into your X-Plane Flight simulator's Resources/Plugins directory. I like to rename it with the commit details and the date so it is easy to tell subsequent versions apart.
Notes
737Fmccdu, X Plane, Xplanesdk
comments powered by Disqus