My 3D printer went bust last Friday ... it's fixable but I have to wait for parts to arrive. So the whole weekend has been spent suffering from 3D Printer Withdrawal Syndrome.
Meanwhile, an idea came to me on how to better edit the 737 Throttle Quadrant body. Earlier, I had imported the original 3D model by thingiverse user jamang1999 (https://www.thingiverse.com/thing:725470) into TinkerCAD where I planned to slice and dice it into smaller pieces so that it could easily be printed on a 3D printer.
The way I ended up doing this in TinkerCAD was two add some large "hole blocks". 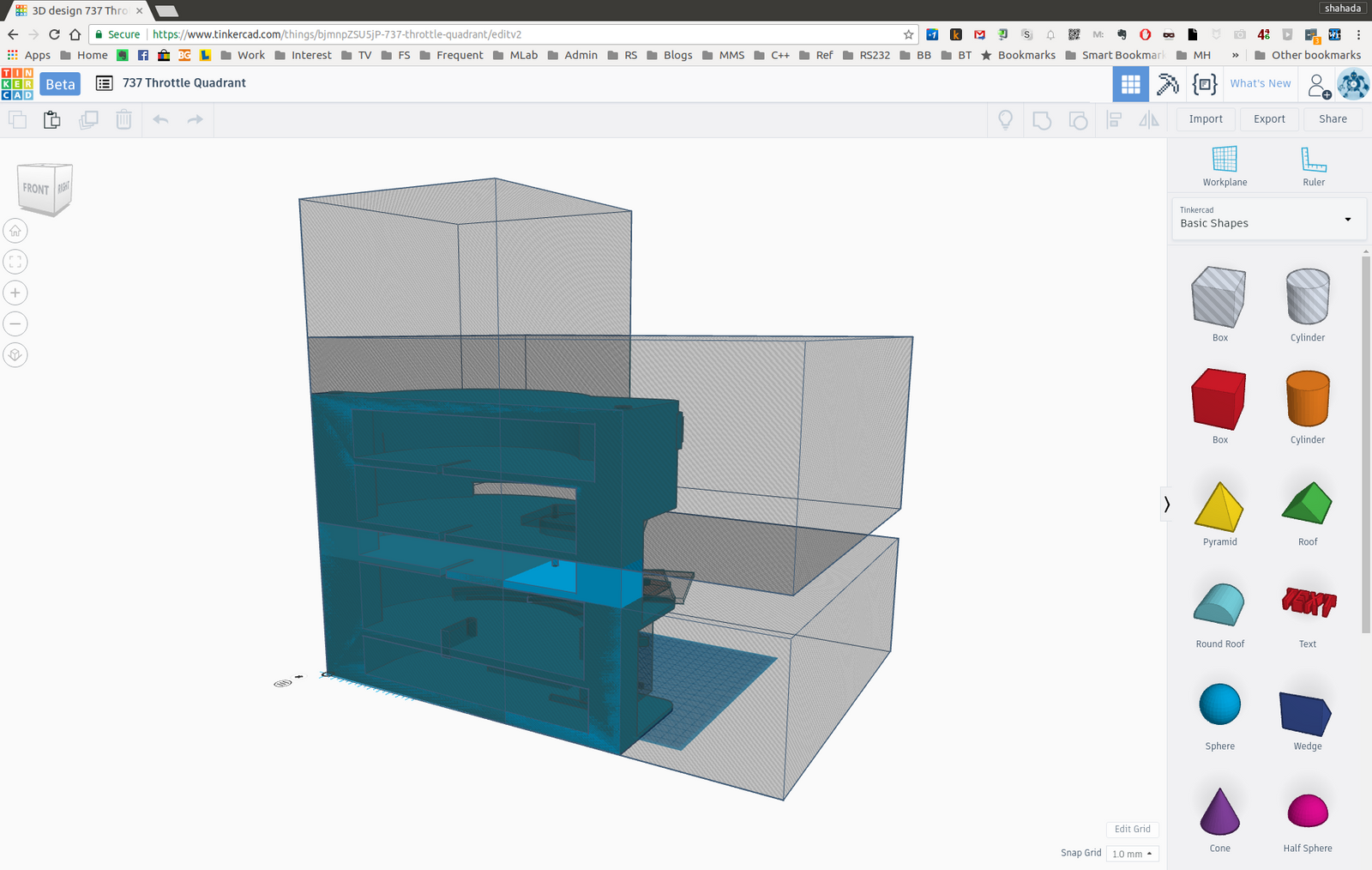 when you "group" the Throttle Body with these "hole blocks", it leaves behind just the piece not covered by the blocks: 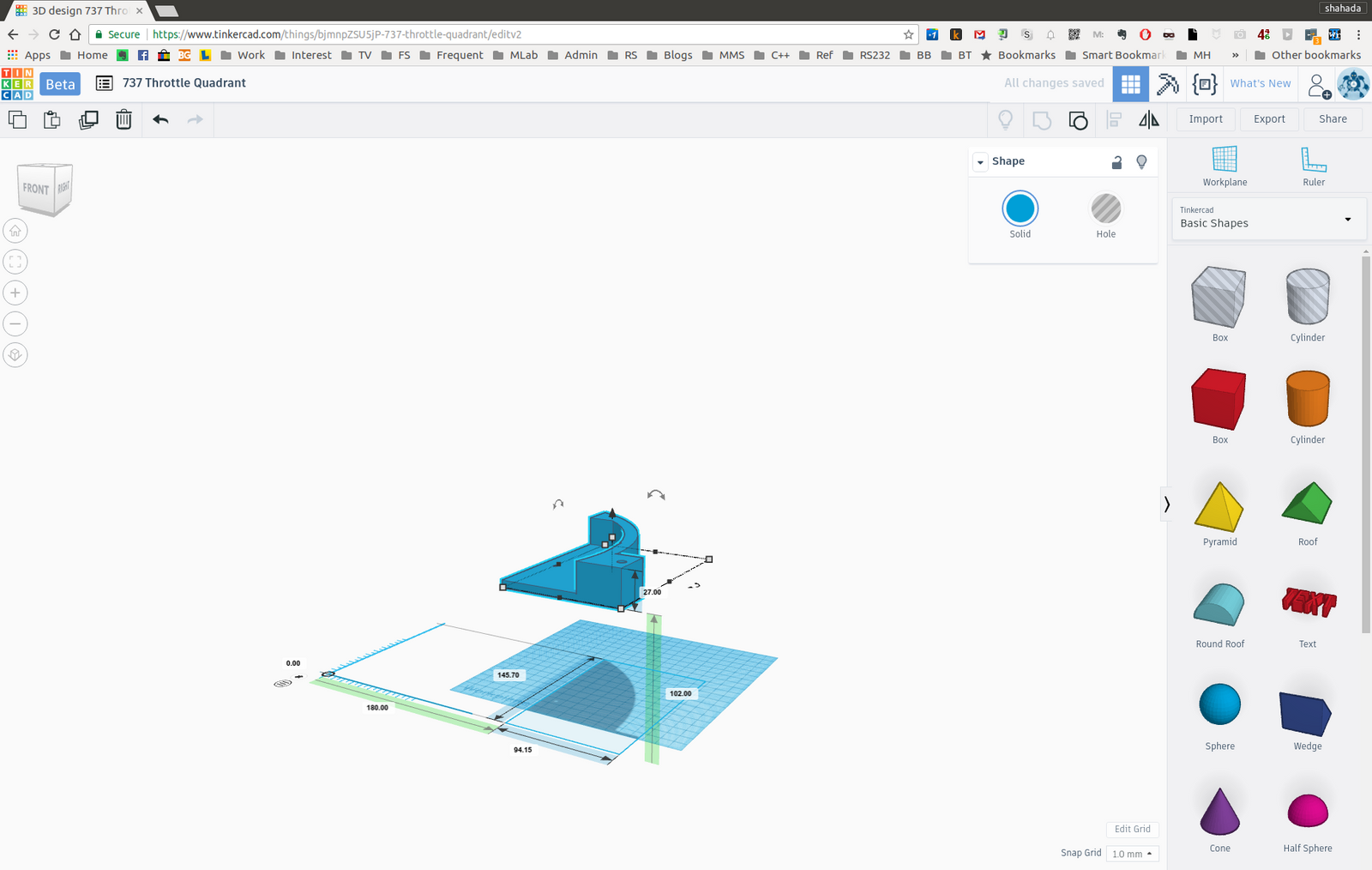 So by moving these "hole blocks" around, I was able to cut the entire thing into over 30 smaller pieces. I wrote down the exact position of the "hole blocks" for each of those 30 pieces. I stored the STL files for each piece in a git repository.
Now whenever I made changes to the design, I would have to figure out which piece was affected, and reposition those blocks around to "cut" the part again. This was extremely tedious, especially when a change affected multiple parts.
I also found it quite hard to relate the 3D model with the individual pieces when making changes. It's possible to temporarily "hide" the "hole blocks" while editing, but it was tricky to position changes as you do not want to make a screw hole that sits across two pieces for example.
Then I had this idea over dinner just now. I started with a blank workspace, and re-imported the STL of the 30 pieces back into tinkerCAD, placing them back into their original positions. Something like this: 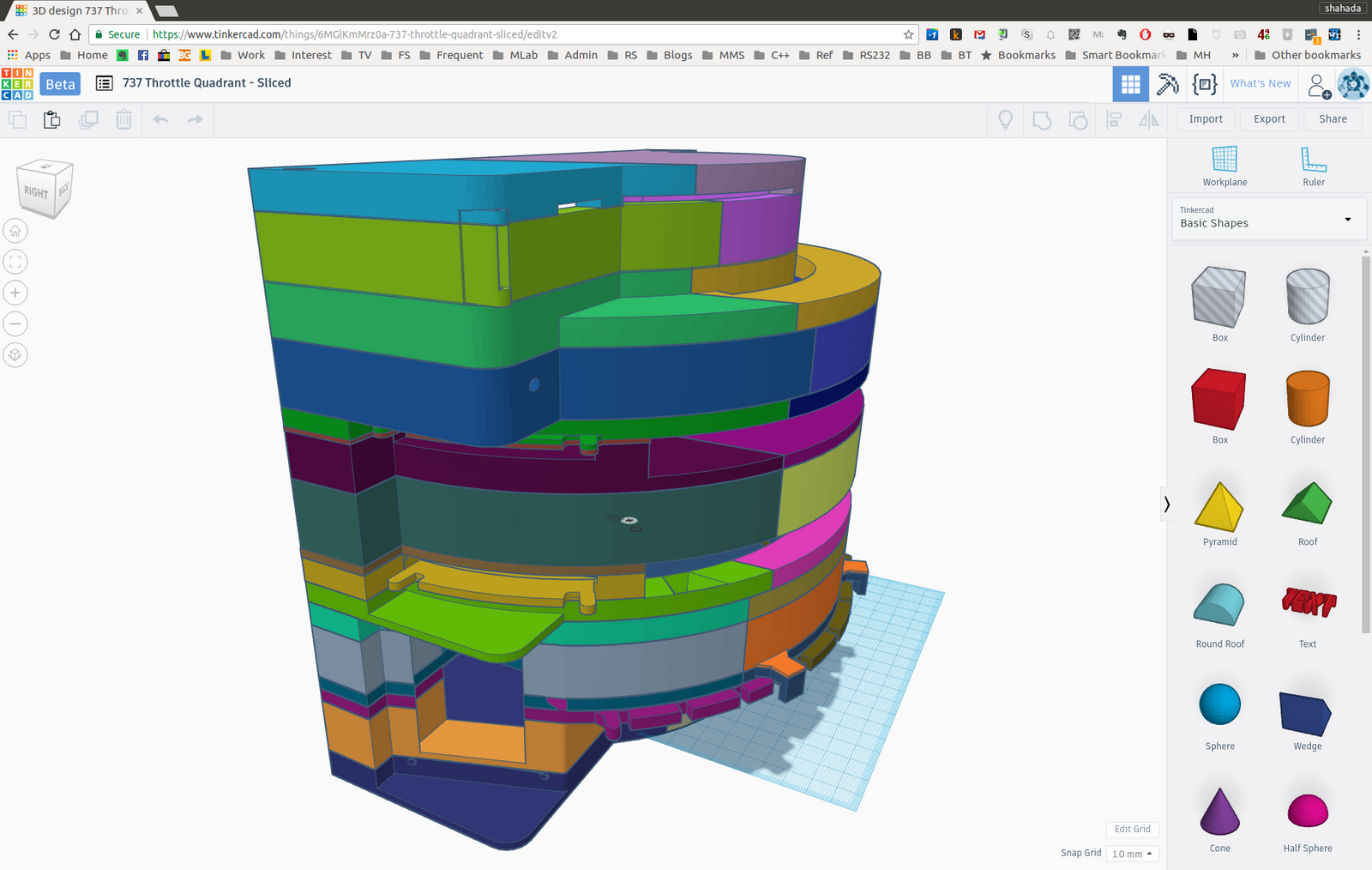 Now it is very easy to see which parts are affected by my changes. And when a part is affected and I want to reprint it, I can just click on it and export that part as an individual STL! No need to reposition those "hole blocks" and get their positions exactly correct any more.
It's so simple and obvious once you think of it. And constantly I'm amazed at how much I can get away with in TinkerCAD, without having to learn how to use a real "CAD" program yet. 😎
With this I've decided to drop the git repository and just maintain the tinkerCAD design as my working copy for everything related to the 737 Throttle Quadrant. I will try to maintain a history of changes via the Group/Ungroup feature, so it should be possible to see the changes by repeatedly hitting the ungroup button. I will post a summarized change log in the comments section in TinkerCAD, with more details on the blog here.
The new sliced version of the 737 Throttle Quadrant Body can be found here:
https://www.tinkercad.com/things/6MGlKmMrz0a-737-throttle-quadrant-body-sliced
I've also discovered that TinkerCAD can group designs into "projects" ... so I've created a new project for all parts related to the 737 Throttle Quadrant. This can be found here:
https://www.tinkercad.com/#/?type=all&collection=projects&id=lxsYA3i0su2
If you're planning to print any of these pieces, bear in mind that some will need to be flipped over in your slicer software to avoid the need for supports.
Random Notes
737Tq, Tinkercad
comments powered by Disqus