So there I was ready to attach my ancient Rasberry Pi onto a mounting plate for a project I've been working on ... only to realize that it had no mounting holes. Fortunately I have almost every model of Raspberry Pi sitting unused on my desk, and so I decided to upgrade the project to a Model B+, which does have mounting holes (Of course, they just happen to be 2.5mm holes whereas all the standoffs I have at home are 3mm, but I managed to make do with some screws and nuts).
So with everything ready to power up, I formatted Raspbian onto a new MicroSD, and pushed it into the slot ... only to have the card pop back out again. Hmm ... push ... pop. Push ... Pop. Checked to make sure I had it the right side up ... push ... pop. Tried with a different MicroSD ... PUSH ... POP!
Did some googling and it turns this is a common fault on these "improved" B+ and 2.0 models. I never had this issue on my original Pi as it's SD card slot was the friction type ... you push it in and pull it out when you want to. It's widespread enough that the Pi 3 has reverted to the friction type microSD slot. Which is fine and good but what do I do with my Model B+ now? It's probably past it's warranty however long that may be.
Did some more googling and it turns out there's a rather drastic fix ... but given that I had nothing much to lose (you can't boot a Pi without a working MicroSD card) I went ahead.
You need a strong pin ... I used the male connector at the end of a jumper wire. First, locate the tab at the side of the SD slot, and bend that upwards. 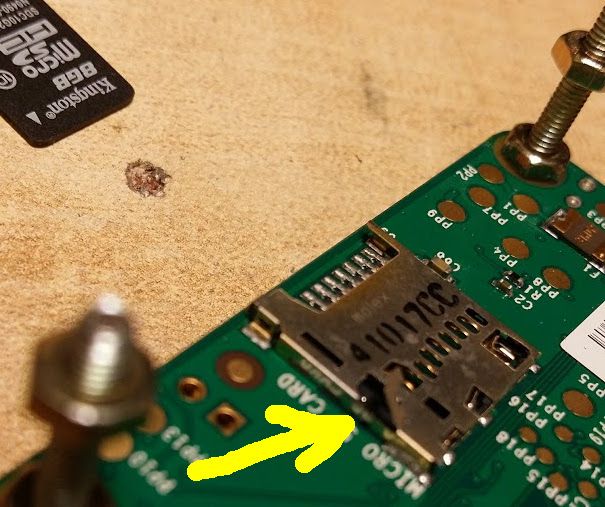 Below this tab is the spring-loaded ejector mechanism. You can use your pin to press inwards at the inside edge of the slot to figure out how it works and get an idea of what's where. Now push the pin through the hole under the lifted tab, and push the ejector mechanism towards the center of the card slot. With some luck ... it will come apart, and fall out of the slot. 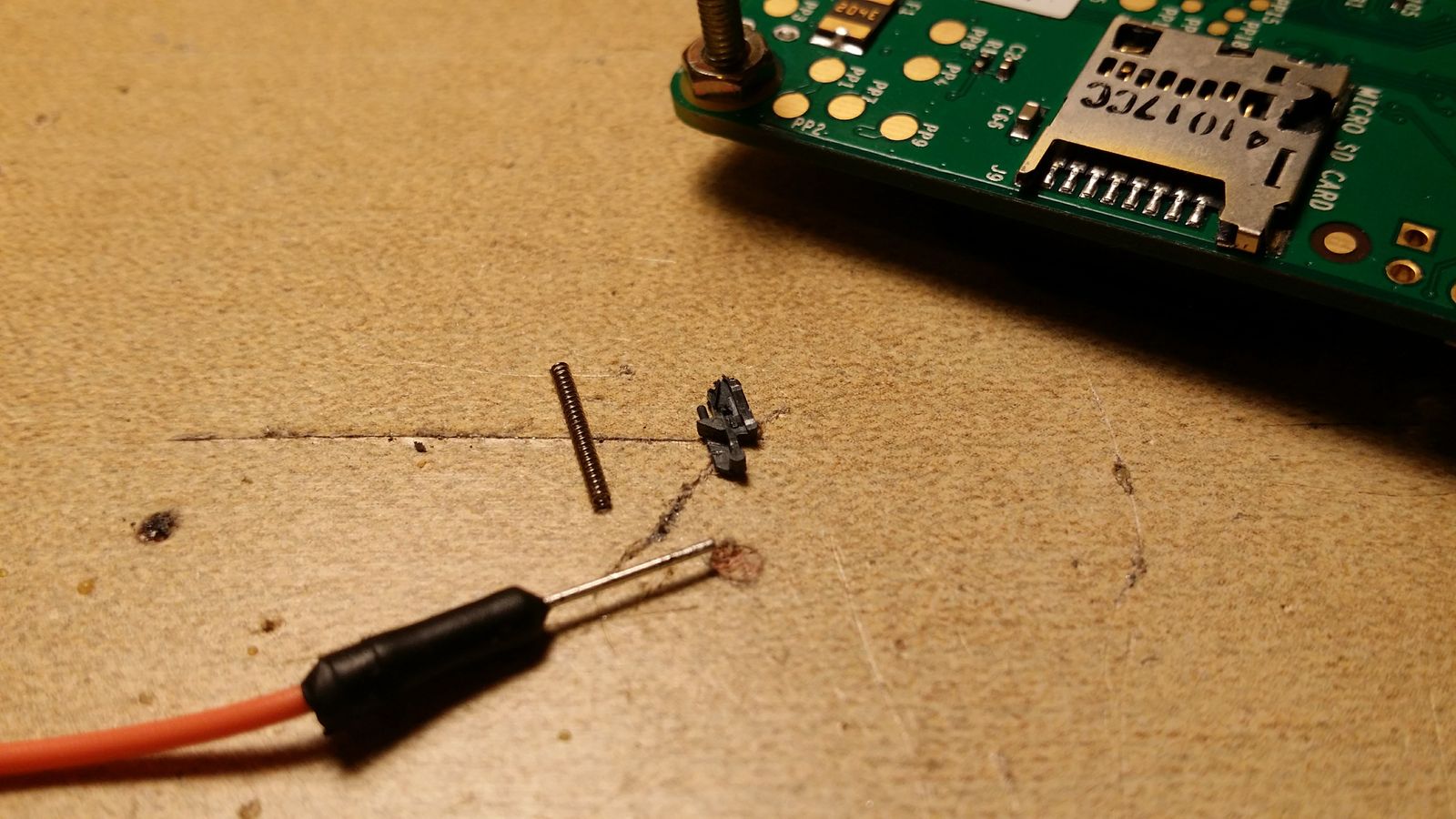 The black part is the latch mechanism and is the part that usually comes off first. The second is the spring ... which may need a bit more work to get out. I ended up using the pin to push it to the center until a bit of it stuck out of the slot, and then grabbed at it with a pair of fine tweezers.
With these two bits removed, pushing in a microSD card will result in it staying in place, just like the original friction style slot. To remove the card, just grab at the end of the card with a fingernail and slide it out. 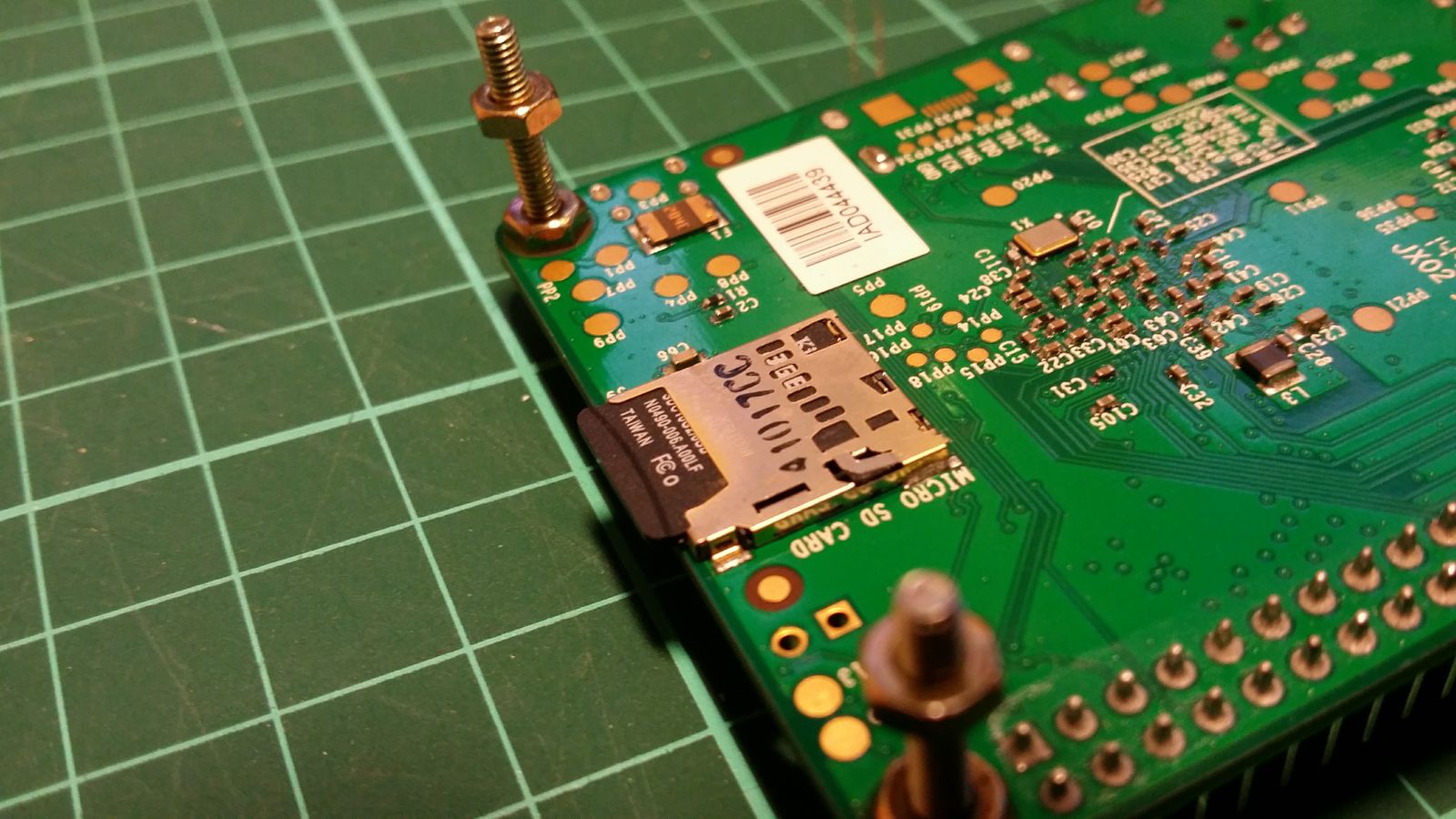 Works much better this way I think.
Raspberrypi
comments powered by Disqus