I've been using a AC to 12VDC converter and a 12V to 5V converter on my desk for the last 10 years, to test out various project stuff. Recently I've been exploring stepper motors, and needed a bit more power than what my existing power supplies were rated for. So it was time for an upgrade.
Thoughts
The switching power supplies I typically see on the market have a metal frame but semi-exposed AC power connections. While they're cheap and reliable, I'm not a fan of this design and decided to make an enclosure for the power supply unit.
Since I was designing the enclosure from scratch, I figured it would be good to add more connection terminals. My existing power supply has only one pair, and gets messy when I want to power off one project without shutting down another. Multiple connection terminals with individual switches would be very convenient.
I also discovered a rather cheap volt/ammeter on eBay, and thought it would be good to incorporate it into the power supply enclosure. It would help me get a better idea of the current draw for my projects.
I decided to make two separate Power Supply Enclosures, one for 12VDC and another for 5VDC. I planned to bridge the negative terminals of both so there is a common reference ground.
I chose a 12VDC 10A and a 5VDC 10A power supply. This is more than sufficient for most of my projects. To add an extra level of protection, I planned to add fuses on each connection terminal.
Shopping
Here's the stuff I ordered:
Designing the Enclosure
I designed a enclosure out of 6 panels in TinkerCAD. The sides attach to the base and top using a square nut and bolt. There are groves along the sides to allow a front and rear panel to slide in. I added some ventilation slots along the side panels, and raised mounting points for the power supply unit. 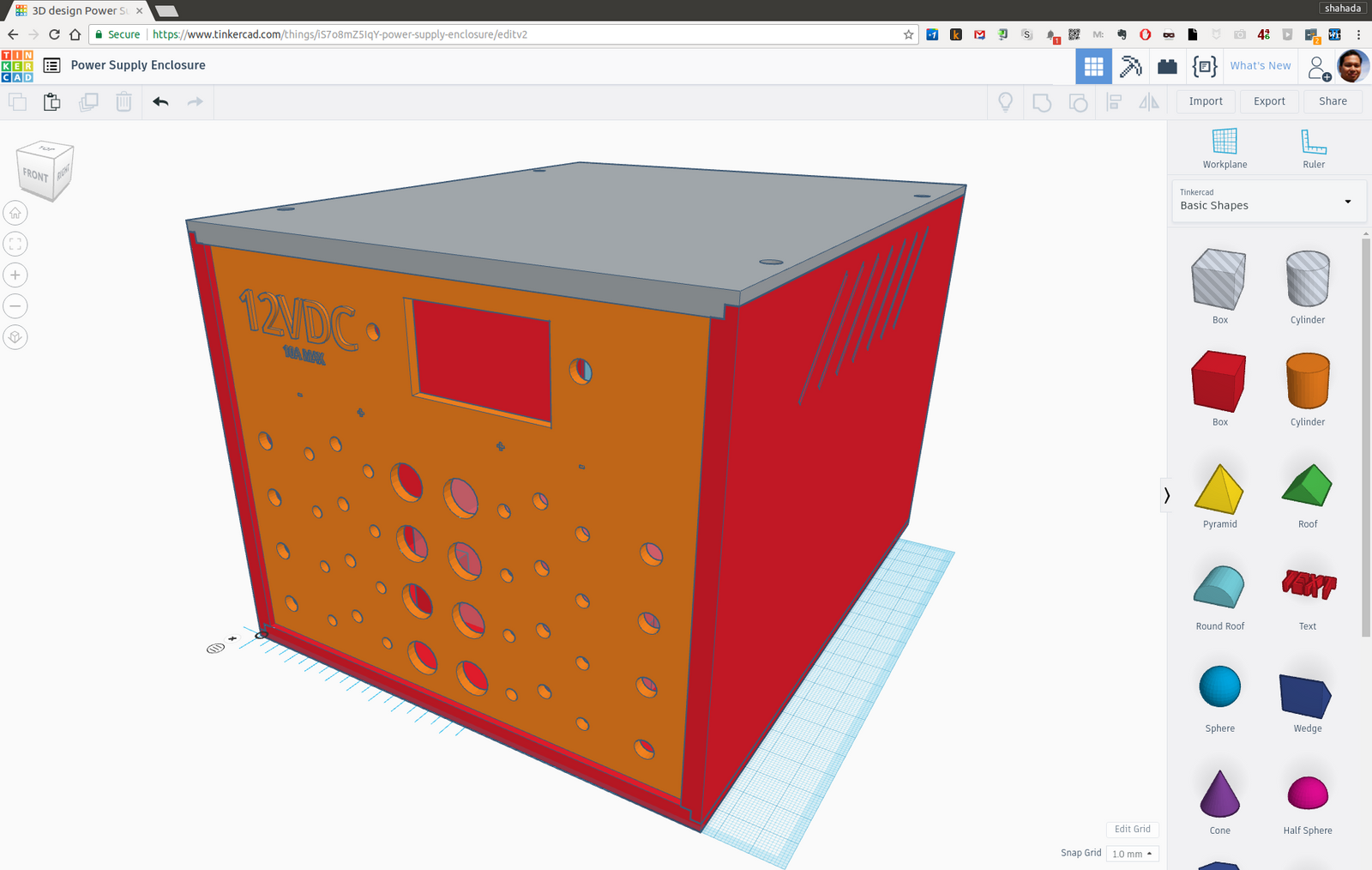 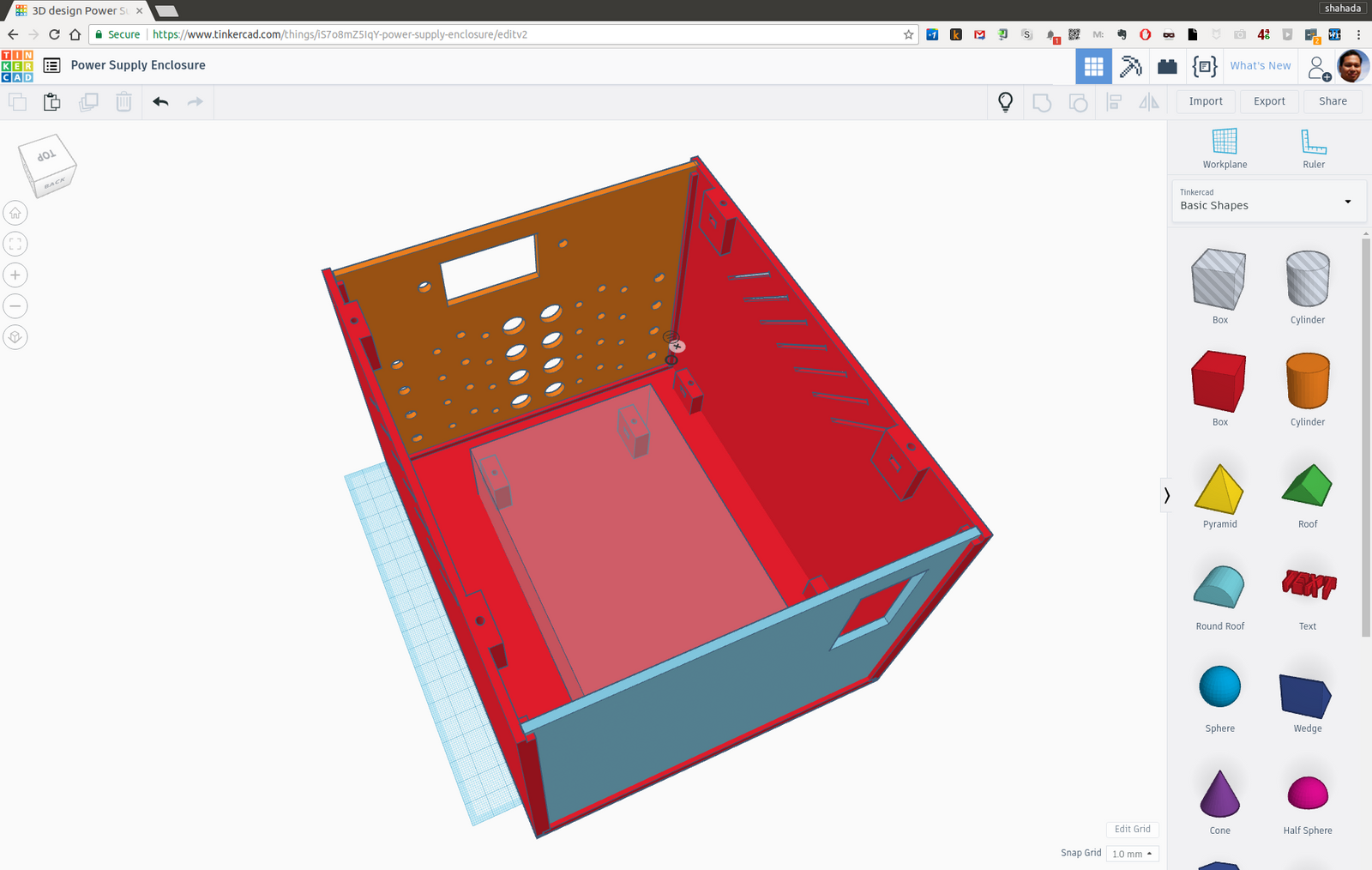 Wiring
The Volt/Current meter requires some special wiring. I decided to put it on a switch so the display can be turned off if not required.
Here's the wiring diagram: 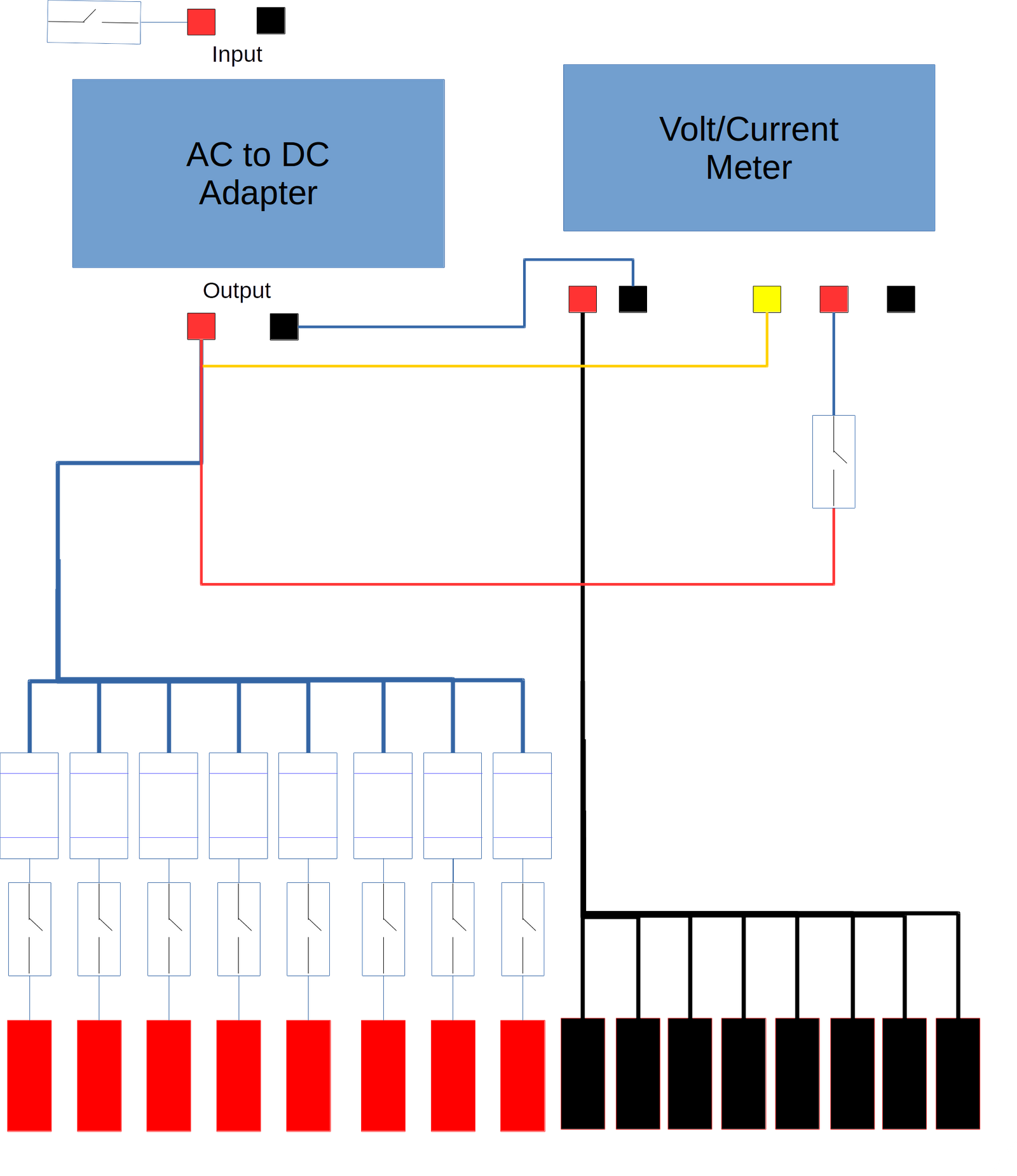 Soldering the Front Panel
I started by attaching all the components to the front panel: 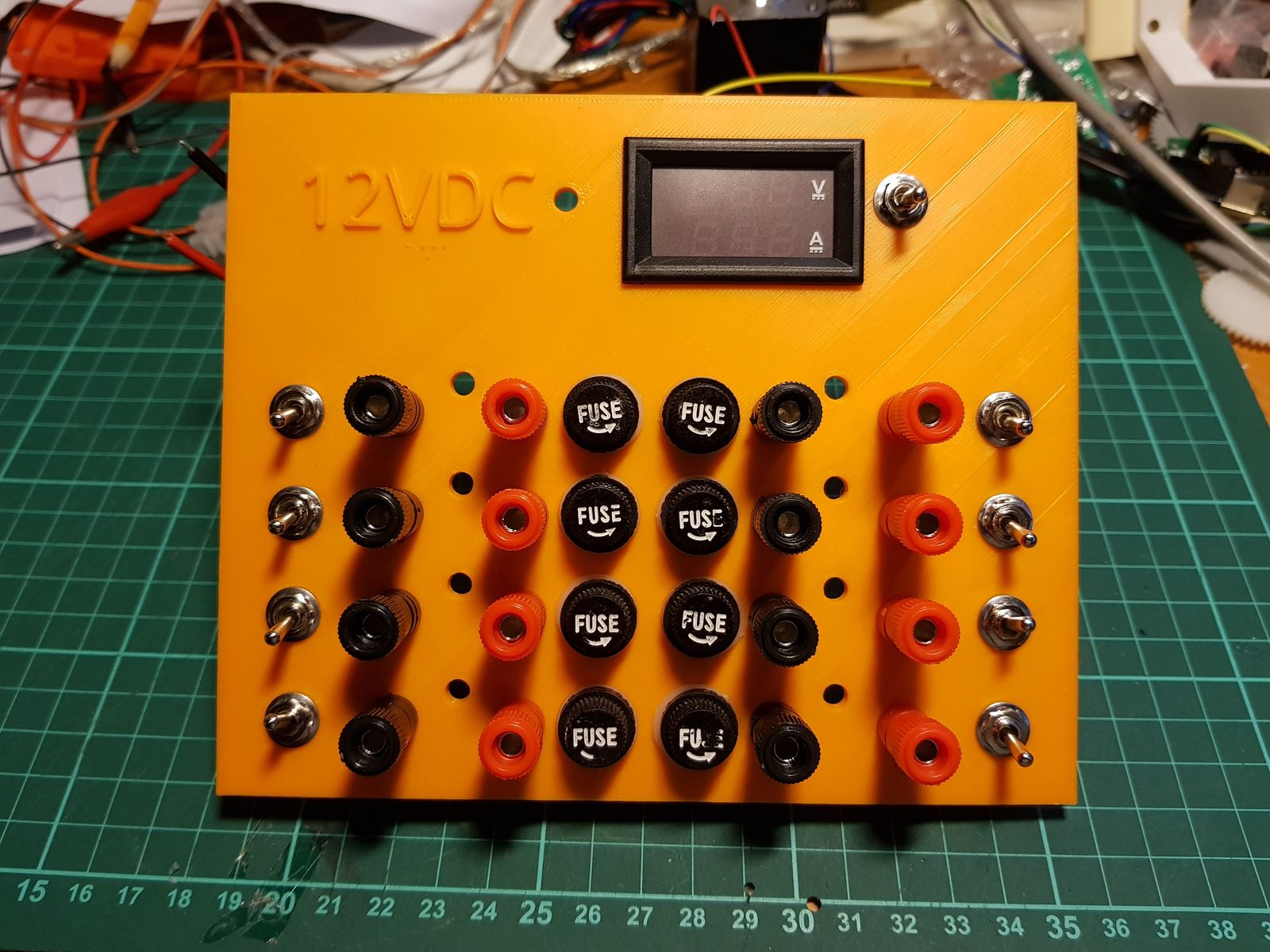 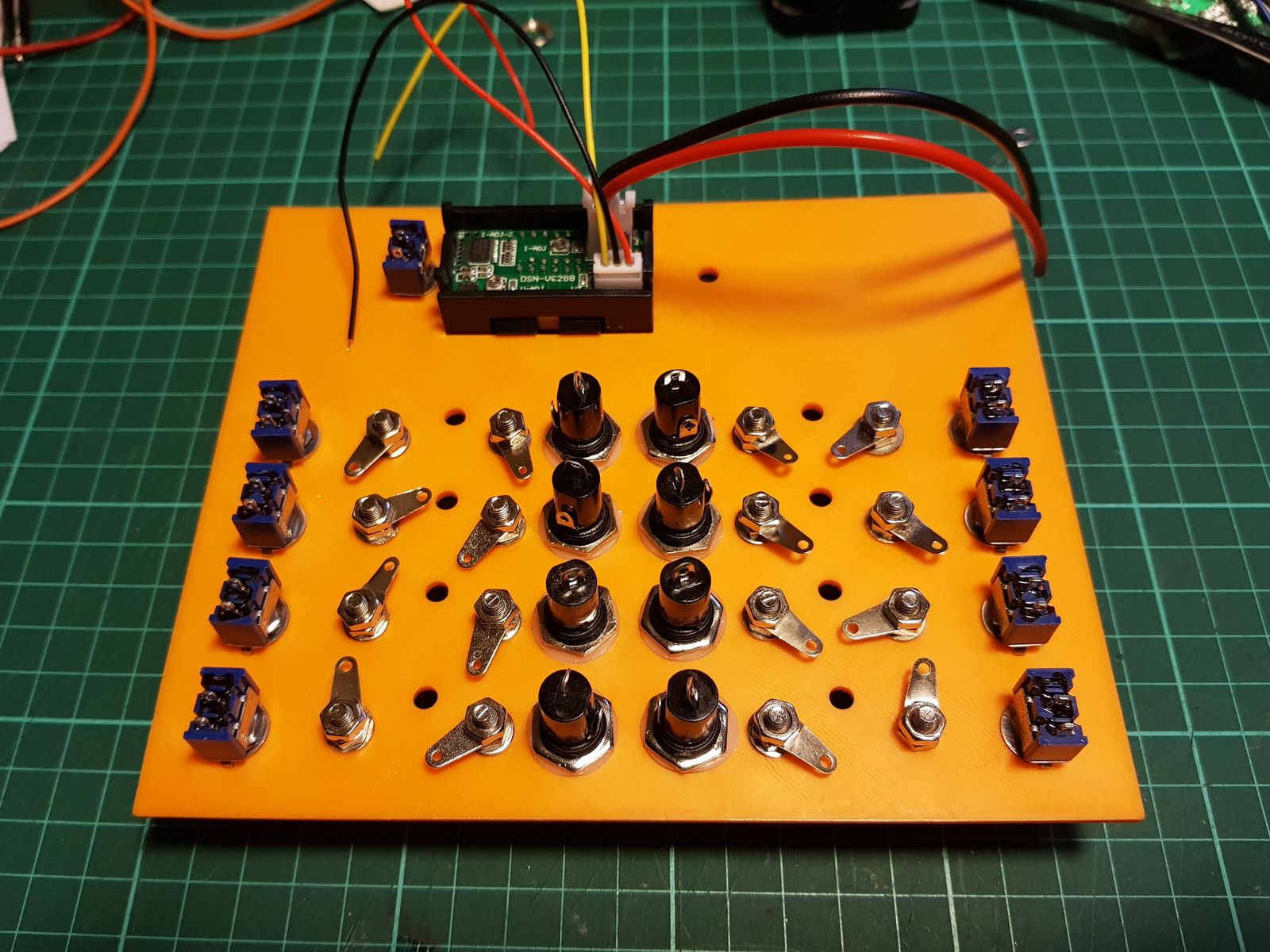 The terminals came with a metal tab. I put them to use by soldering them together to create a bus for the negative terminals. 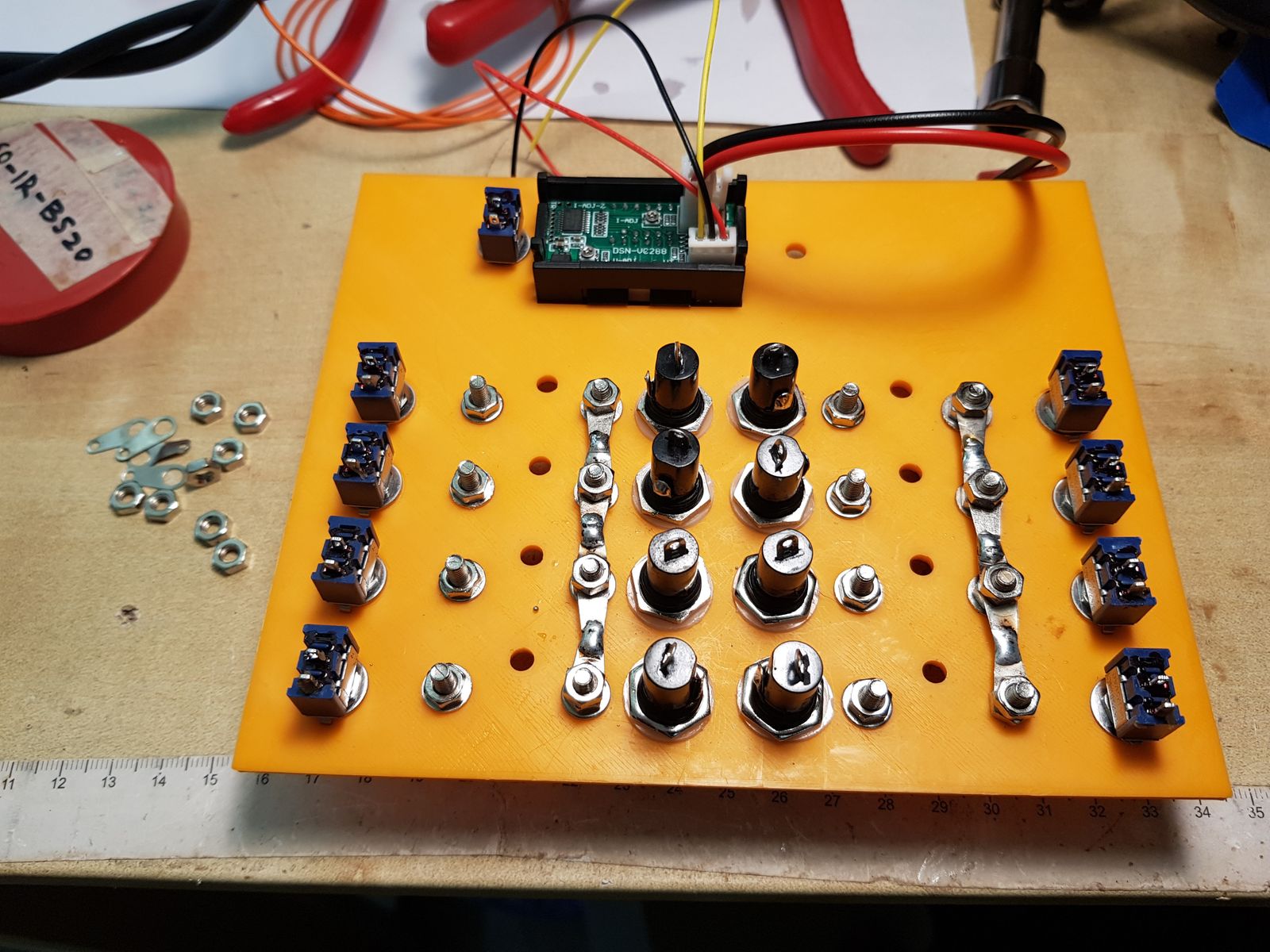 Next I added in 5mm red LEDs attached the cathode to the negative bus. 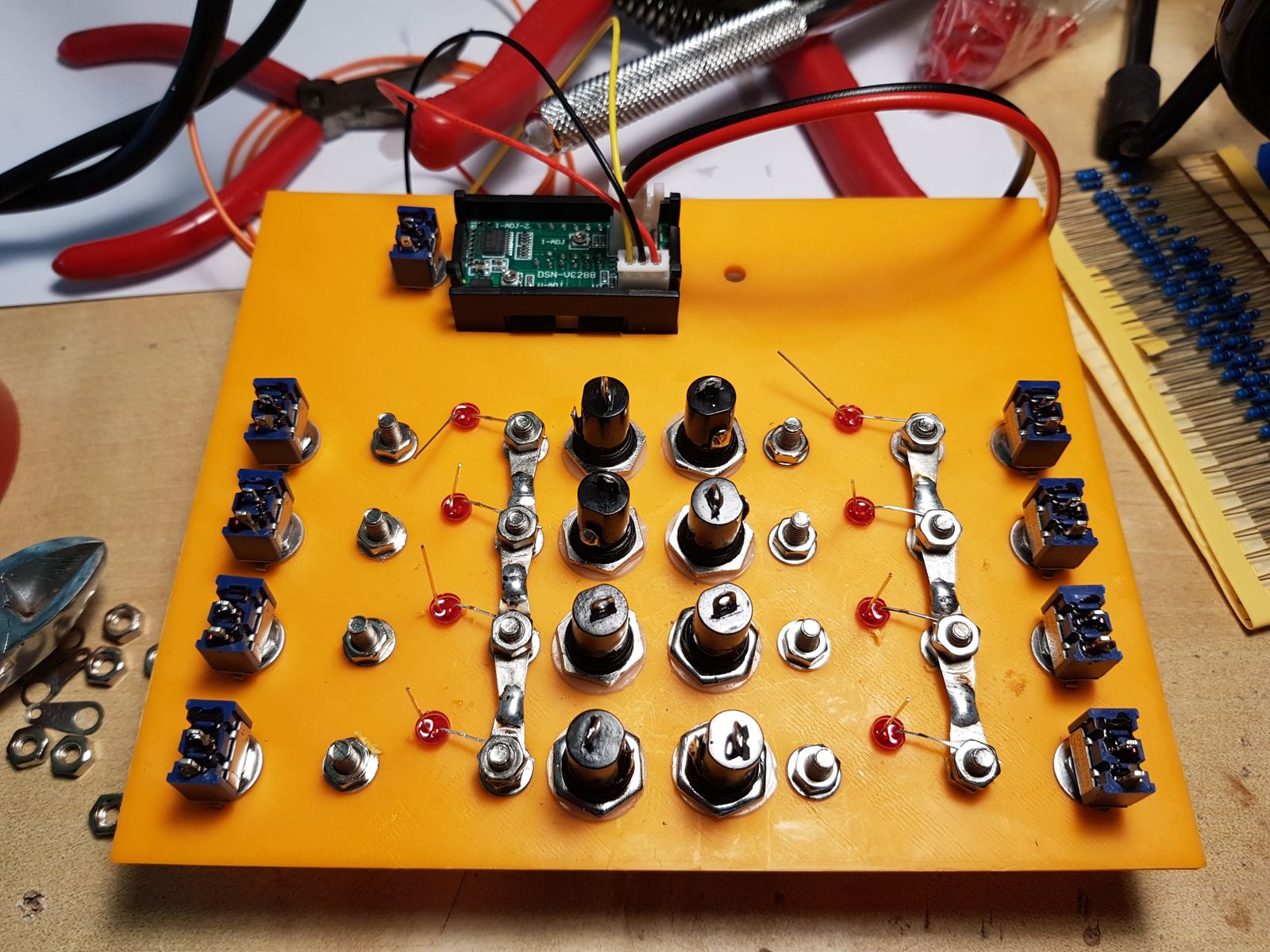 The anode of the LEDs were soldered to 680Ω resistors which were then soldered to the switch. I wrapped this in heatshrink tube to avoid it contacting the negative bus. 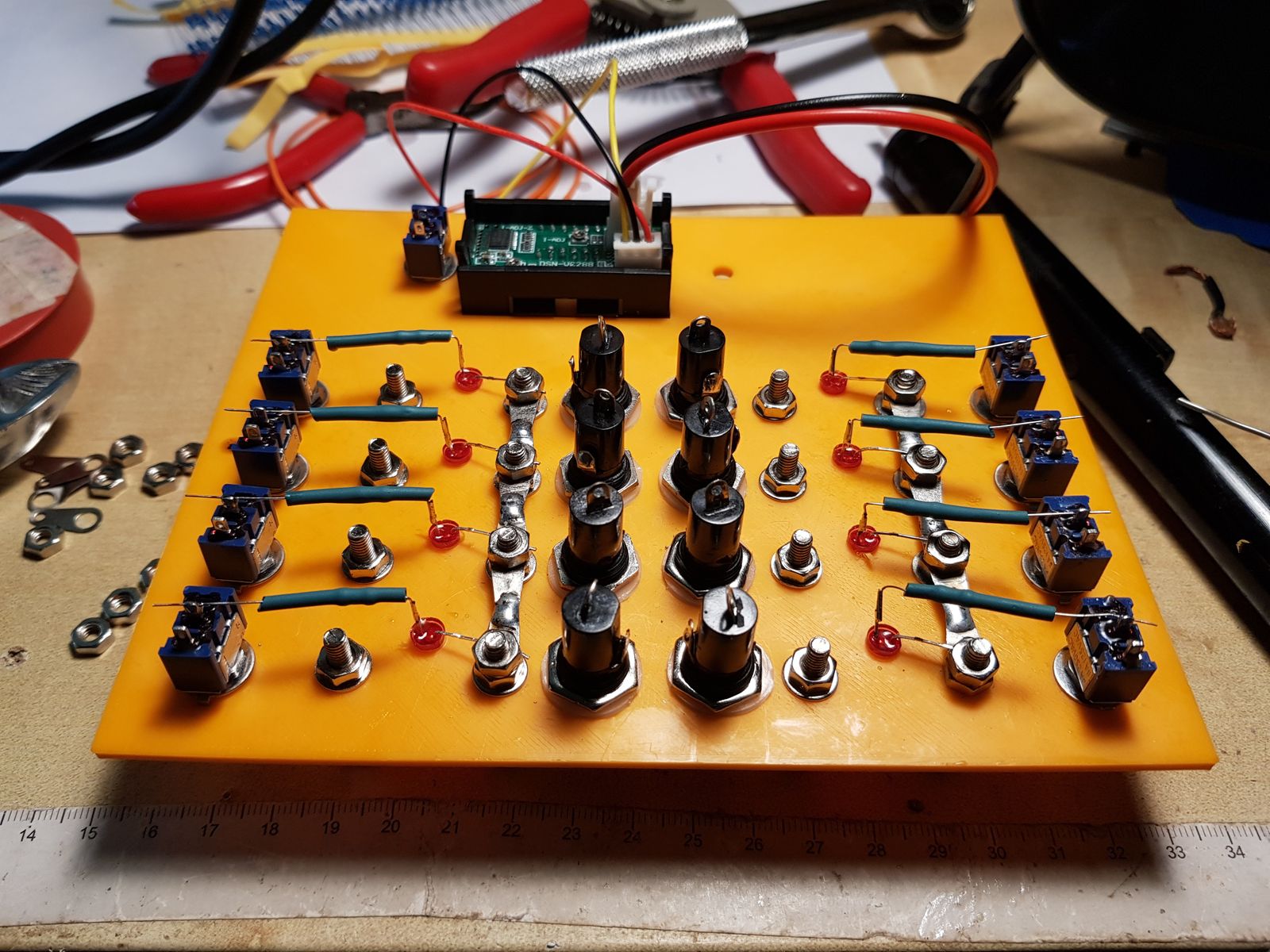 Next I wired the switches to the fuse and positive terminal. 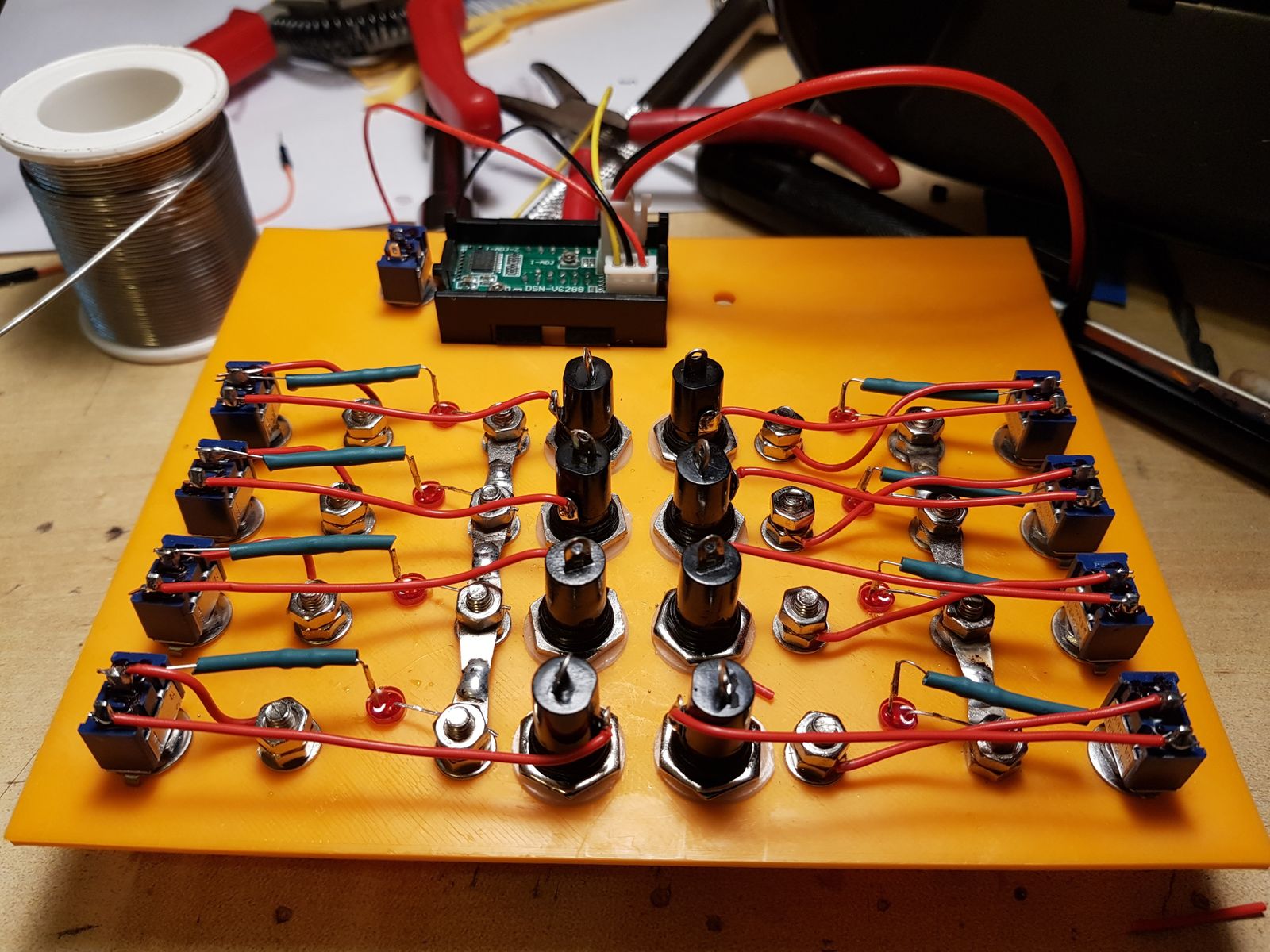 Then the fuses were all connected together to form a positive bus. 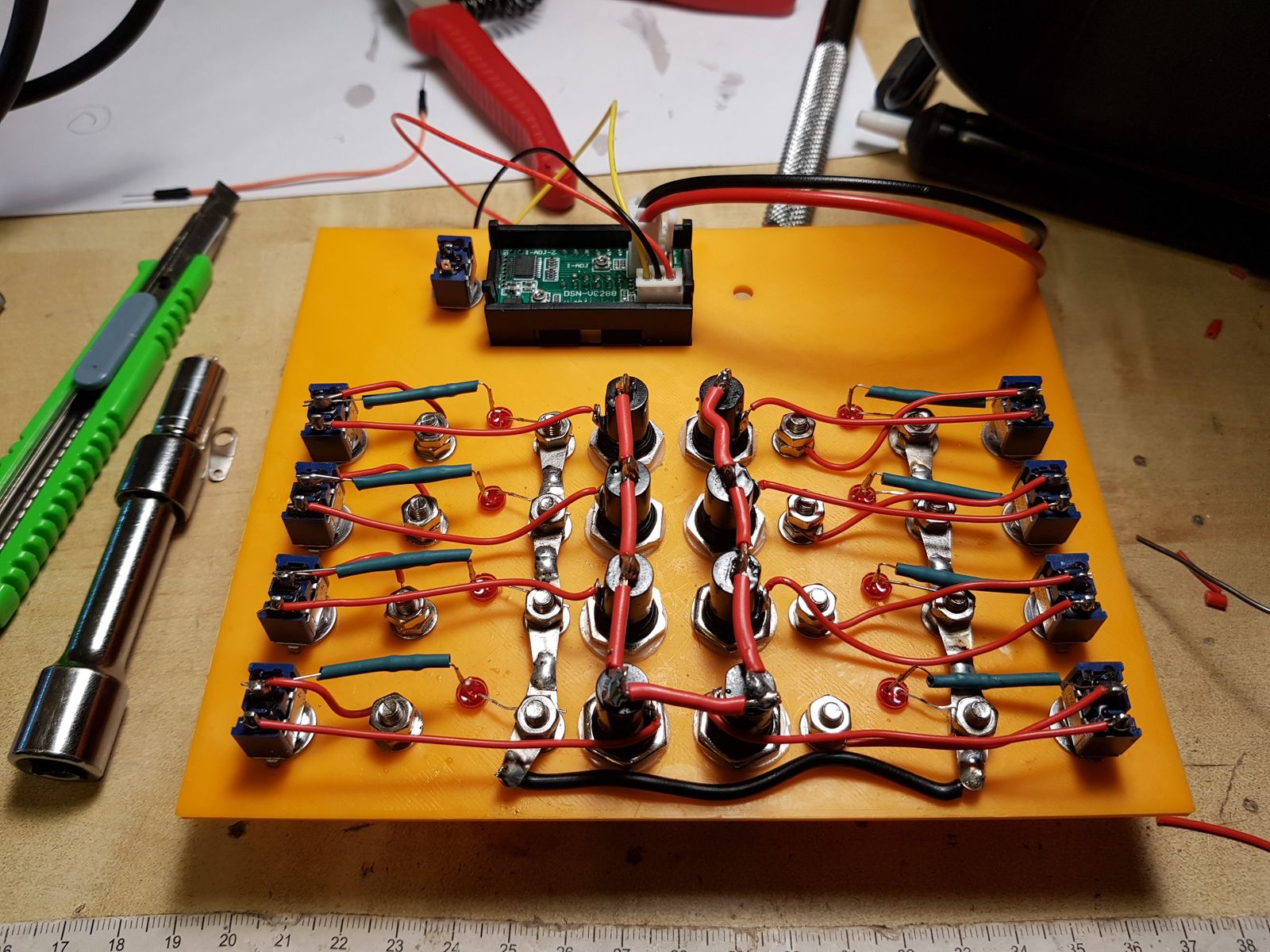 Finally the volt/ammeter was wired up. I attached two spade connectors to the wires that connect to the power supply unit's DC output. 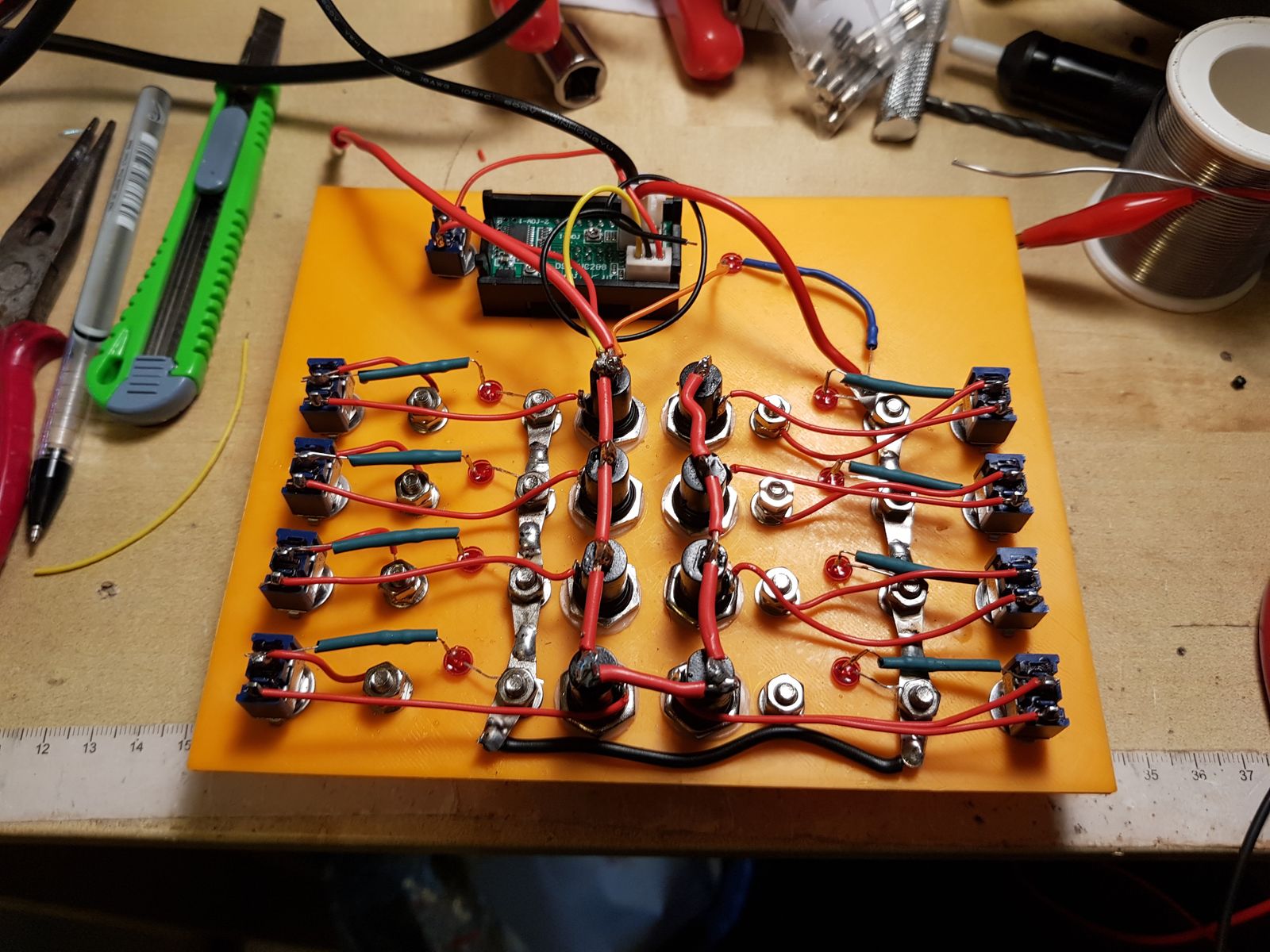 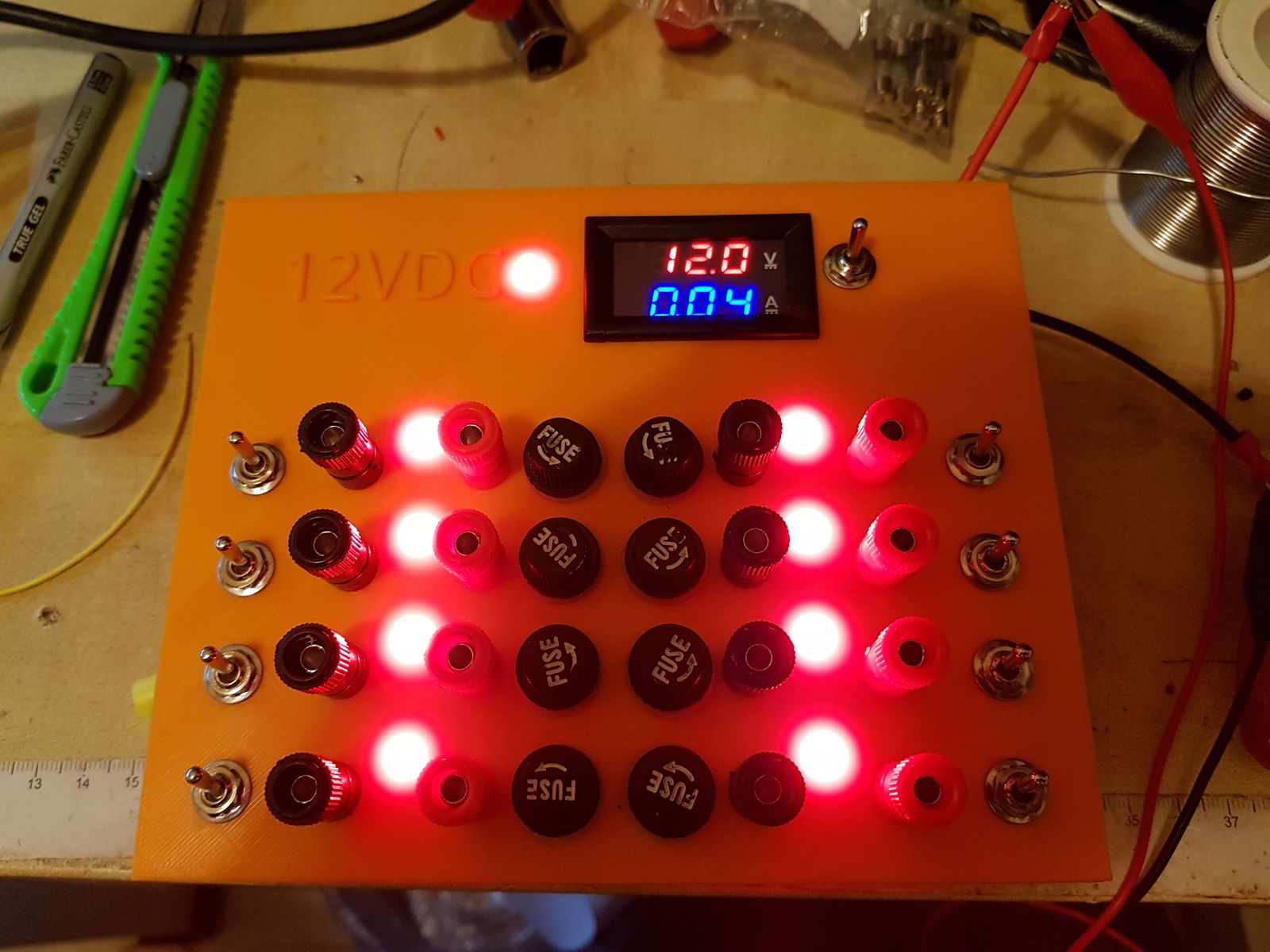 In hindsight I could have used larger resistors as the LEDs were still bright. This would also have reduced the no-load current draw.
Back Panel
The backpanel has a cutout for an IEC 60320 C13/C14 Power socket. I soldered a piece of electrical cord to it, covered the exposed terminals with shrink wrap tube and electrical tape, and attached spade connectors to the other end of the cord.
There is also a DC- terminal here, so that can share a common negative with my 5V DC power supply. 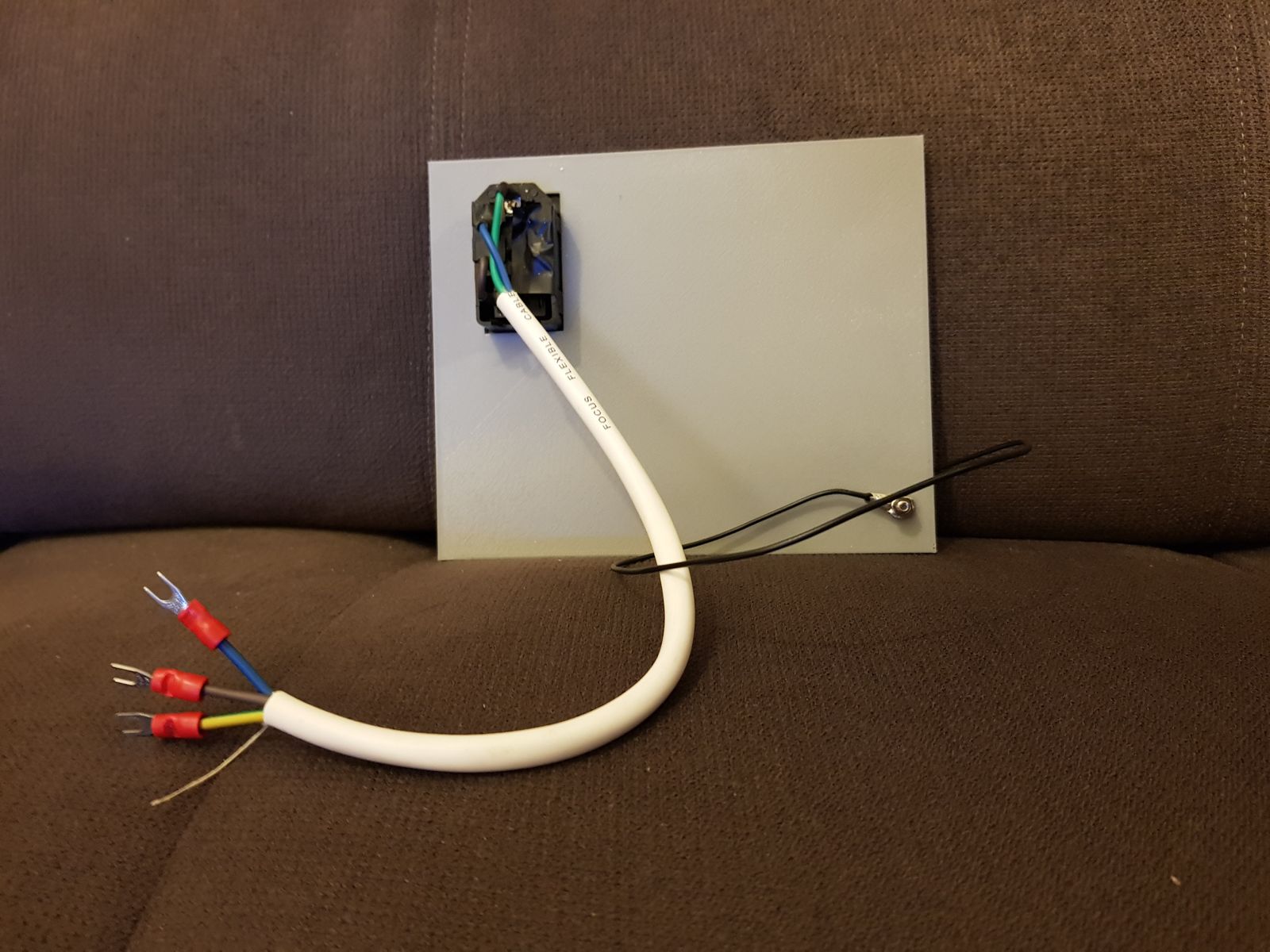 Assembling the Case
As the panels came off the 3D printer, I started assembling the enclosure. Everything fit together with perfect alignment. 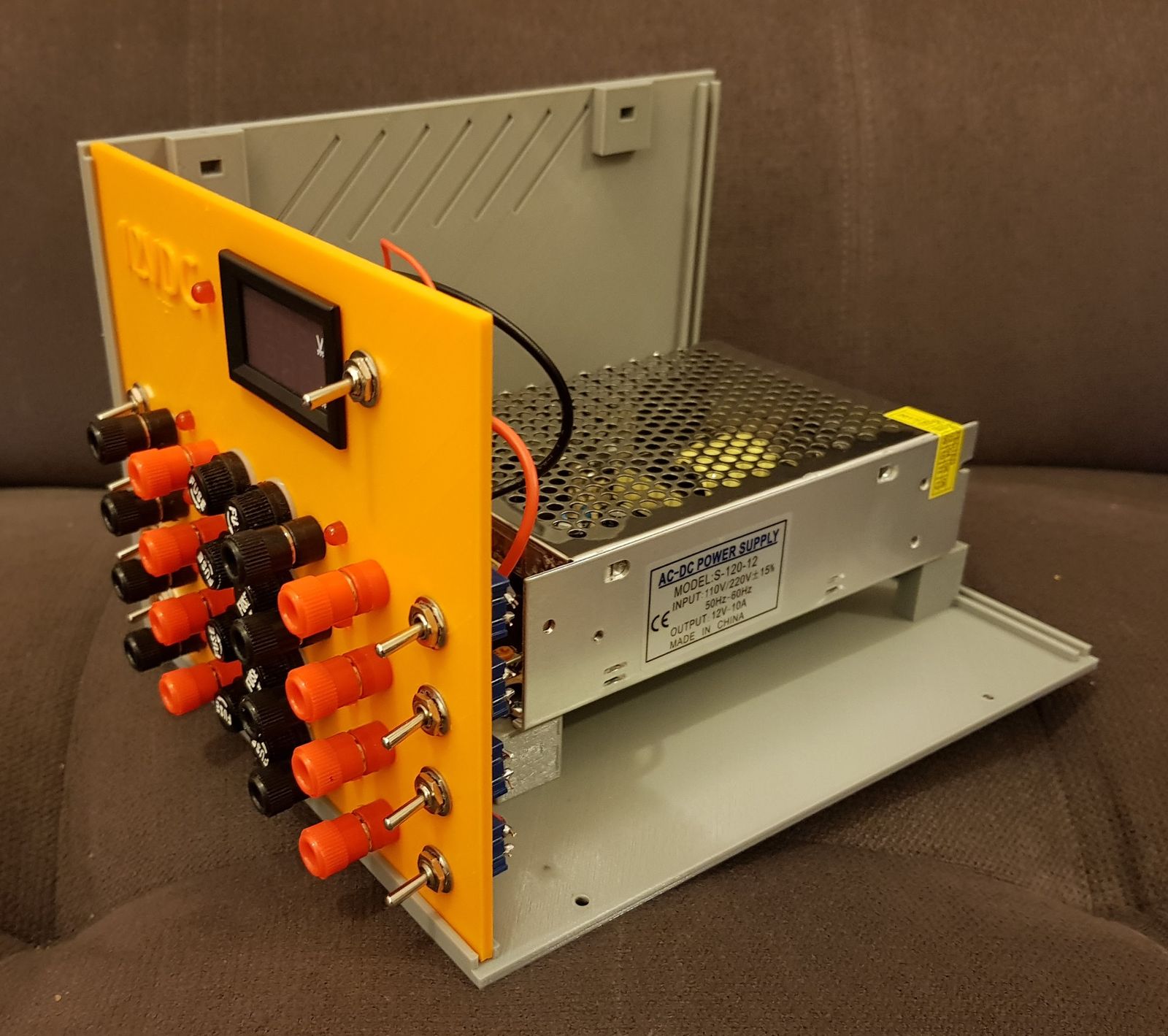 Both the front and back panels connectors are connected to the power supply, and that is it! 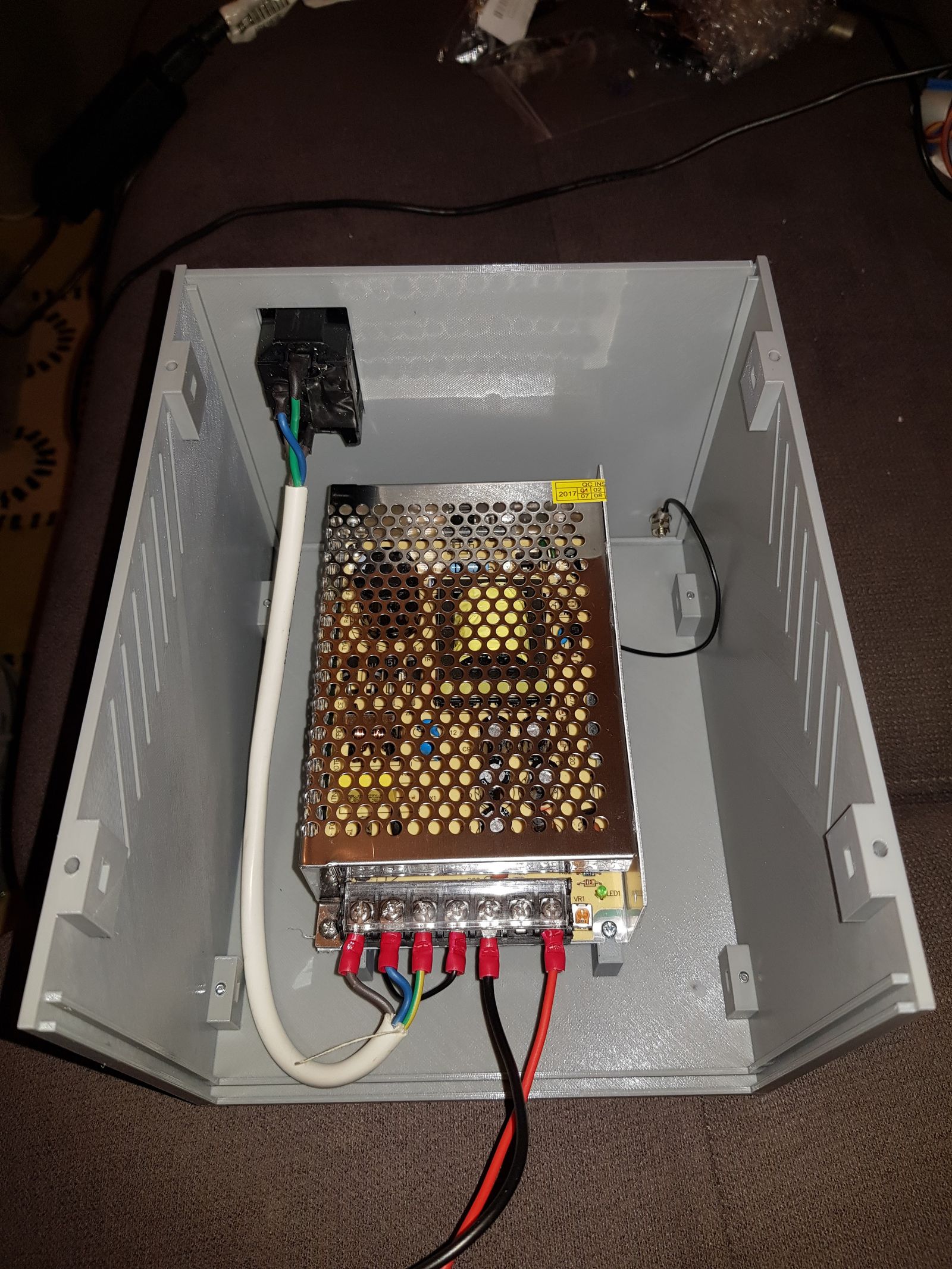 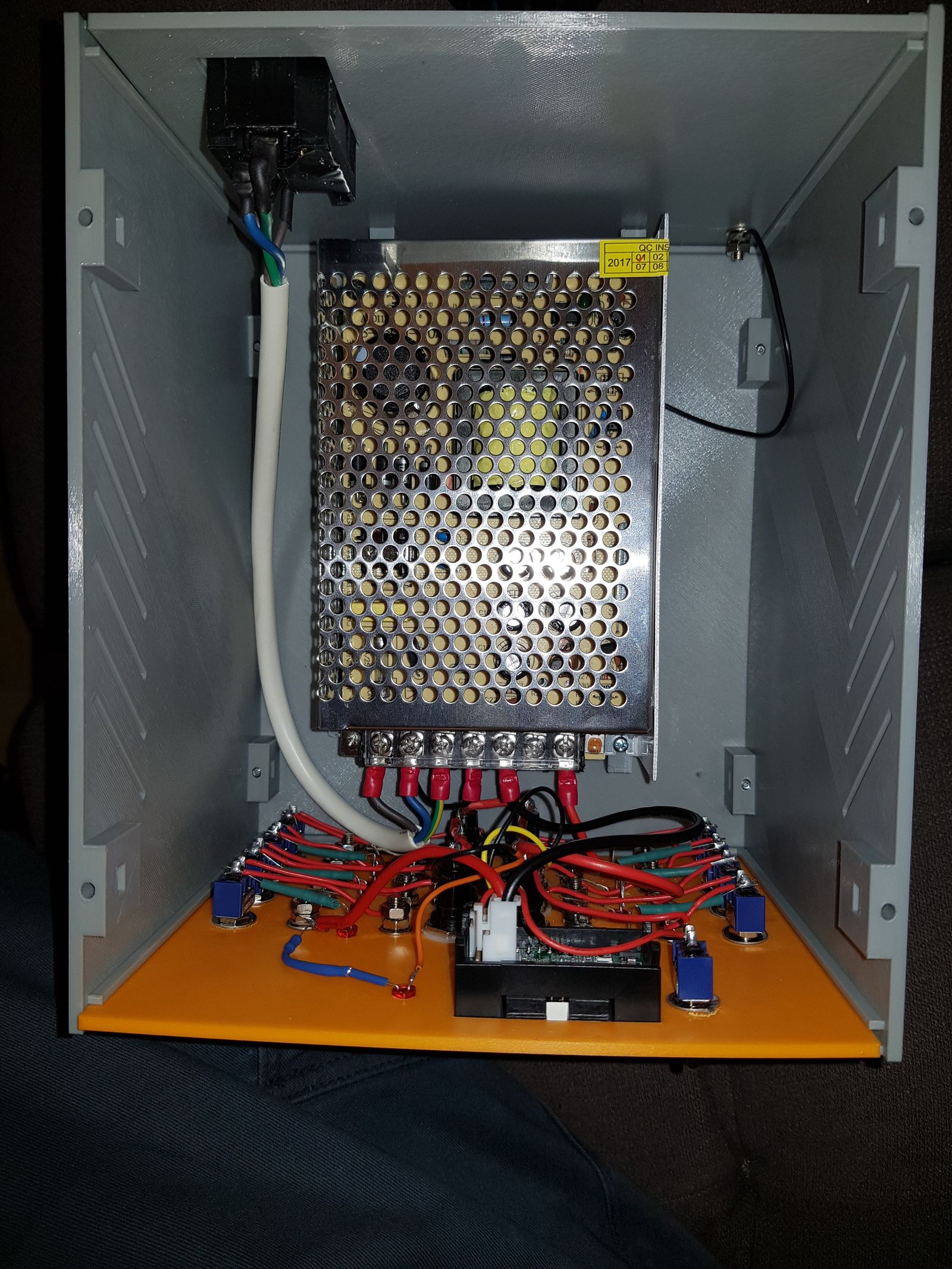 Final Touch
The last step was to paint the raised edge of the text on the front panel with black enamel paint.
Here's the end result: 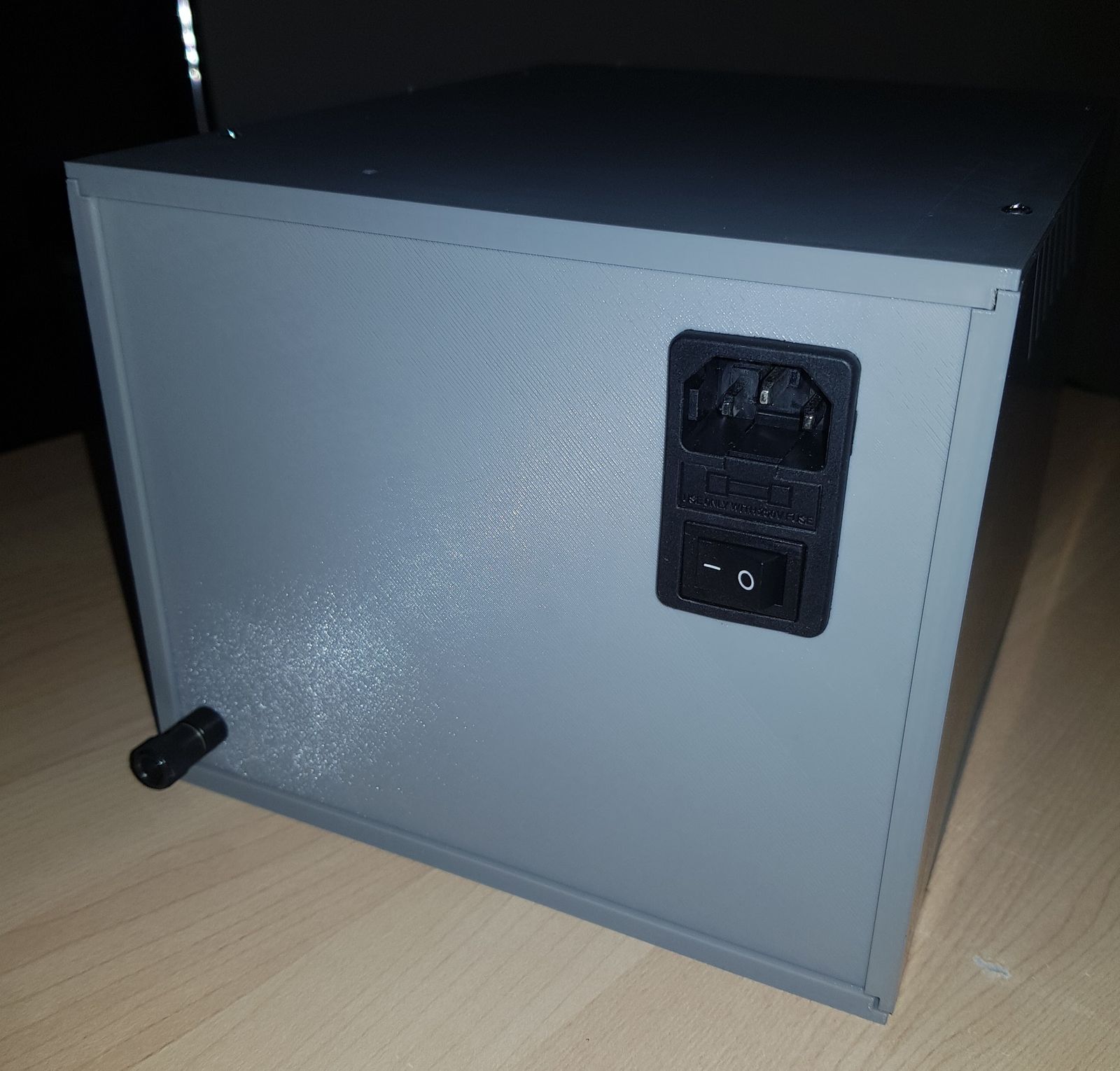 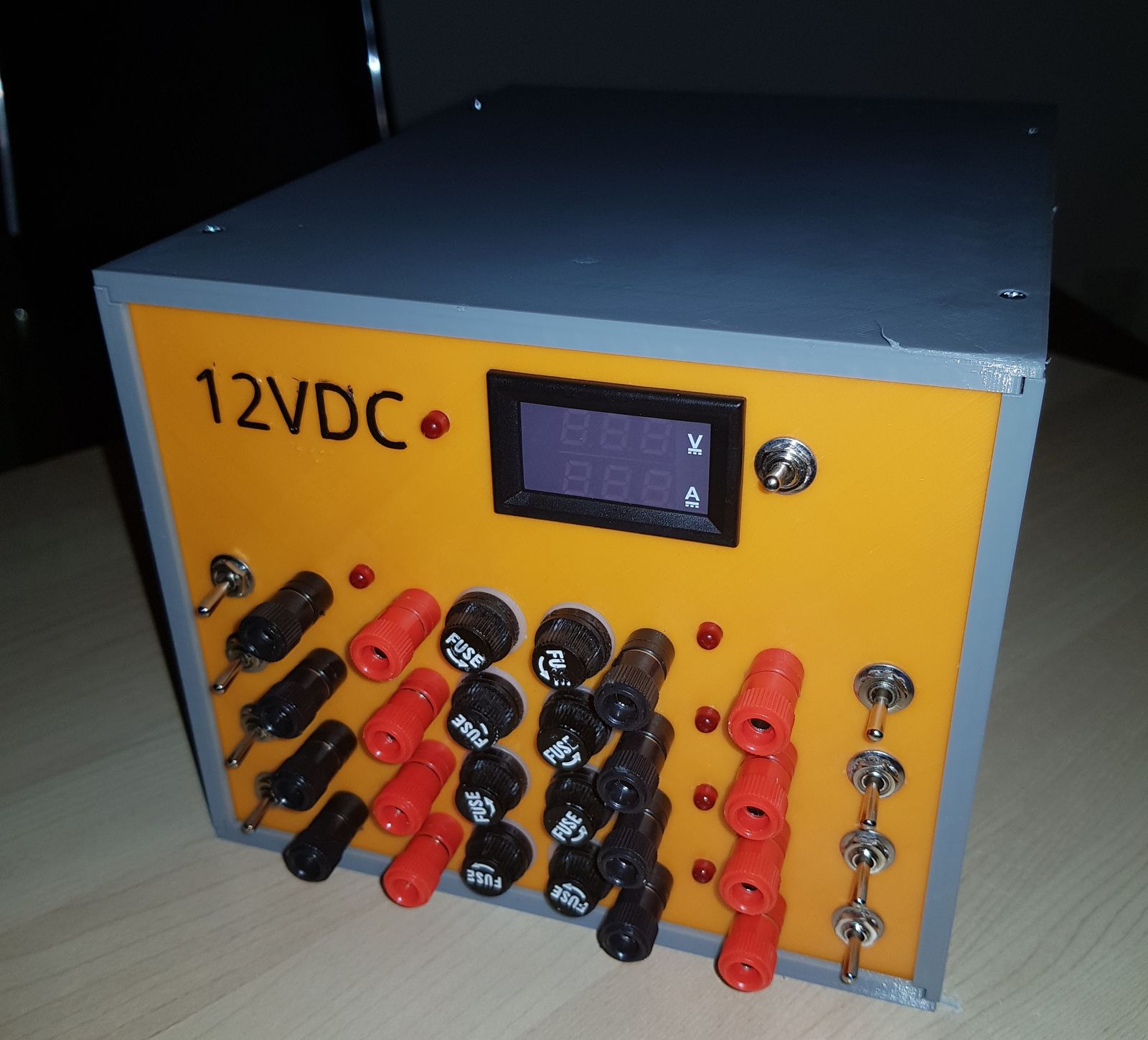 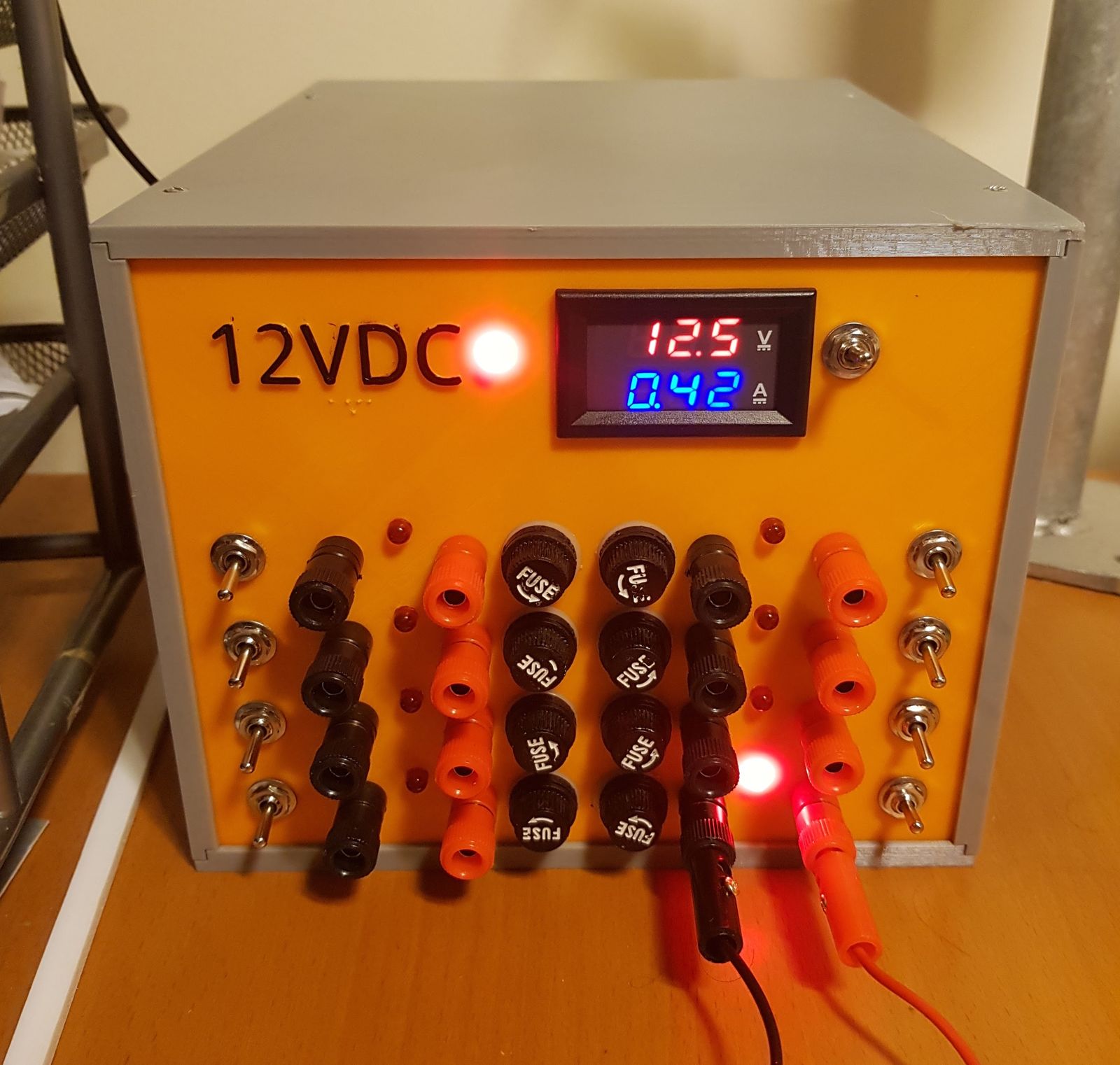 Update 22 Sep 2017
I've been wondering about the terminal connectors ... since the screw that it sits on goes through the panel, if you had a metal panel, won't it cause a short? Turns out I've connected them wrongly. 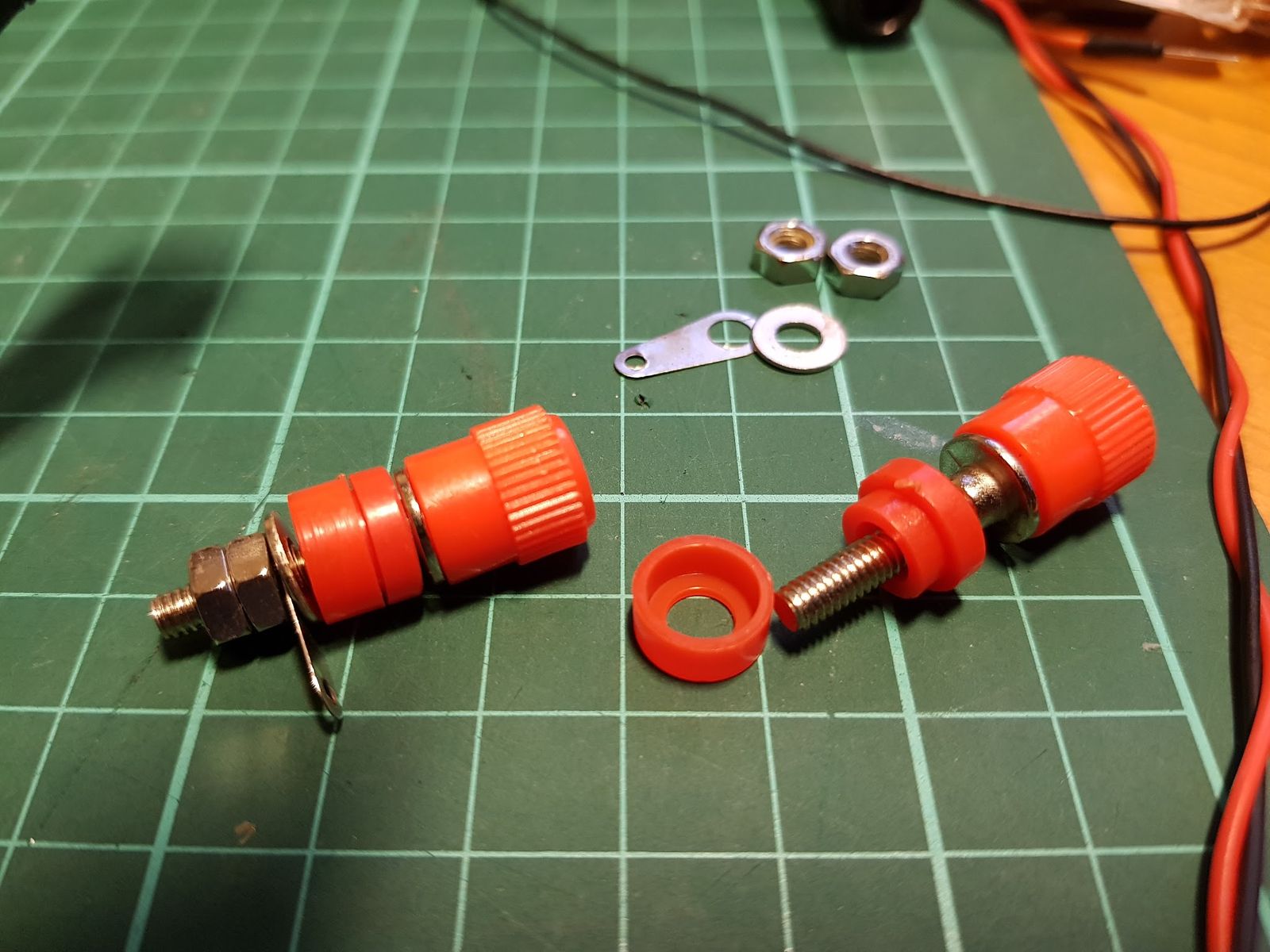 The center part is actually two pieces, with one supposed to sit behind the panel and the other in front. This didn't seem to solve anything for me and as it sat rather awkwardly, so I ended up putting both in front. But the real problem is that the hole in my panel should actually be 8mm in diameter, and and not 4.25mm to fit just the screw. The front part of the center piece has two diameters, and the narrower part is supposed to fit "inside" the hole, thus shielding the metal screw from the panel. Moral of the Story: People who sell things by the billions usually have thought things through better than I have. 8-)
I've updated the model to use 8mm instead. Since the panel is 3D printed plastic and non-conductive anyway, it doesn't really make much difference and isn't worth re-printing.
Diy, 3Dprinting
comments powered by Disqus