The Energy Saver CFL lightbulbs in my apartment are starting to die. Some of them have been around for over 5 years so this is to be expected. With the prices of LED bulbs dropping, is it time to switch?
I regularly buy my CFL bulbs from Camar Letrik in Taman Paramount where they sell the CFL bulbs for MYR9 (USD2.19). That's a lot cheaper than the MYR 20+ (USD4.86+) the supermarkets are selling them for. The question is: can I get LED bulbs for comparable prices now ? The 18W Energy Saver CFL lightbulbs I use output 1100 lumens of light, so I looked around for comparable LED bulb prices.
First check was IKEA ... who have a LEDARE E27 1000 lumen bulb ( 703.657.32) ... for a whoping RM29.90 (USD7.27). I'm using one of their LED bulbs in a desk lamp on my soldering station, and I quite like it. However, given that it's three times the price of a CFL bulbs to one LED bulb. I'm not convinced to start replacing my general lighting with their bulbs just yet.
I then checked lelong.com.my where I found Philips Essential LED bulbs, with a 11W 1150 lumen variant selling for MYR13.00 (USD 3.62) + RM7 postage. If I order a few then the postage is negligible, and I can justify the price difference over CFLs with the fact that the LED bulbs use less current and also are more eco-friendly as they don't contain mercury.
In the end I dropped by Camar to see I could get the Philips LED bulbs for a better price from them. They didn't have them, but had these instead: 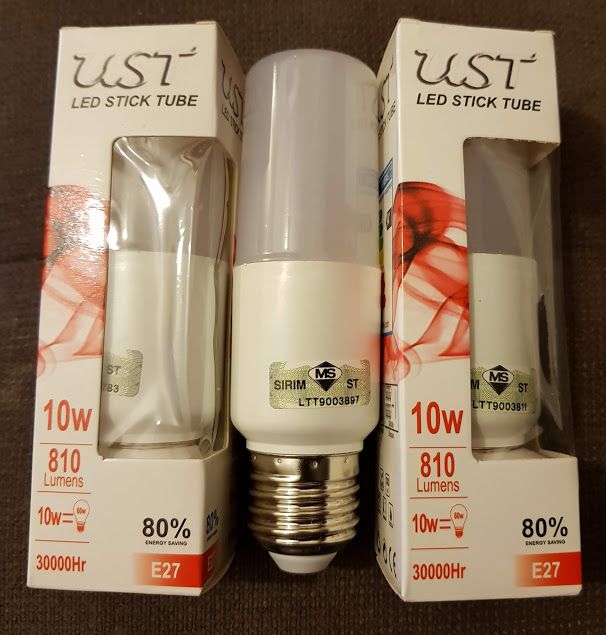 I've never heard of this brand and google didn't return any results either. Camar is selling them for MYR8 each (USD1.94). At 810 lumens they appear to be less bright than my old 1100 lumen CFL bulbs, but the shop assistant plugged them into the tester and they looked sufficiently bright to me. Given that they're quite cheap I decided to buy a few to give them a try. In the worse case I can use them where I don't need good lighting (e.g. on my balcony).
When I got home, I tested them in my living room. I have two light fixtures on the ceiling, which take three bulbs each. This is more than I actually need given the size of the room, so I've been leaving the CFL bulbs in place as they burnt out over time and am now down to 1 working bulb. I took out all three dead bulbs from one of the fixtures, and swapped them with my new LED bulbs bought from Camar. Switched the lights on and ... whoa ... 3 bulbs of 810 lumens is waaaaay more light than I need for this living room. I ended up removing one bulb from the fixture.
Strangely in a side-by-side comparison even a single bulb of these 810 lumens feels brighter than one of my 1100 lumen CFL bulbs. It could be that my CFLs are old and no longer giving out their full brightness. I also noticed that the colour temperature of the LED bulbs are a bit cooler than the CFL bulbs I had. I believe these LED bulbs are 3000K whereas the older CFLs were 2700K. They're both fine, but you probably don't want to use two different types in the same room as then the variance in tone is obvious. Interestingly, the IKEA LED bulbs have a color temperature of 2700K ... so for task area lighting I might go for the IKEA ones as I find them slightly easier on the eyes.
Another thing I like with these LED light bulbs is that they're shorter and slimmer than my old CFL bulbs. In some of my light fittings the CFLs tended to stick out a little from the housing, so replacing those with these bulbs will solve that problem.
These bulbs also come with a SIRIM sticker and are rated for 30,000 hours. At 6 hours average usage per day, that comes up to ... 13.5 years? Let's see if they really can last that long. I will post any failures in the comments of this page. 😀
Leds
comments powered by Disqus