My dad "recovered" this recently ... a DIY doorbell kit I bought in the early 1980s and had on my bedroom door back when I was a kid.

I cleaned it up a bit, and it still works! It sounds very retro, like the telephones from the 80s. The sound of a mechanical bell is quite rare these days.
How it works - Watch In Slow Motion!
When the button is pressed, a circuit is formed that runs from the terminal at the bottom, through the magnet coil, over the wire to the other side, through the metal pin into the striker, and back down to the terminal. The current flowing through the magnet coil attracts the striker towards it, which hits the bell and also pulls the striker away from the pin (The gap is very tiny in this video and I believe you can see a tiny spark). This breaks the circuit, and deactivates the magnet, releasing the striker. The striker then makes contact with the pin again, which reestablishes the circuit and the cycle continues.

(from https://en.wikipedia.org/wiki/Electric_bell#/media/File:Electric_Bell_animation.gif)
Going Wireless
I liked the sound of the bell so much (it sounds so "real" compared to the synthesized doorbell sounds we get nowadays) that I decided to deploy it in my apartment.
Of course, what with it now being 2020, running wire out to my front door is out of the question. After all you can get cheap wireless doorbells these days. So how do I go about turning my old-school bell into something worthy of 2020?
Some browsing led me to two items:
a) a 433MHz wireless button (1pc USD3.55/MYR14.50 + shipping, https://tinyurl.com/u6343gg ) 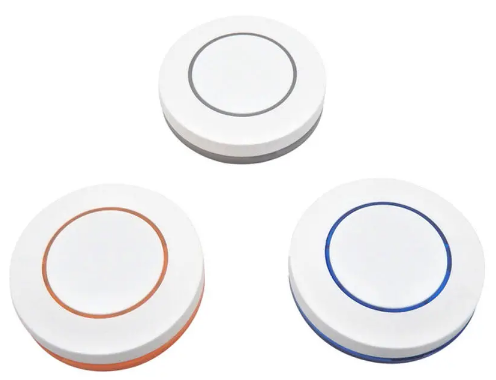 This is a button with a coin-battery inside the casing. You can stick it anywhere. When the button is pressed, it broadcasts out a code number over 433Mhz. Each button has a different code, so you can have multiple buttons for different things.
b) a 433Mhz wireless relay module (3pcs USD5.67/MYR 23.11 + shipping, https://tinyurl.com/ryvx4kr) 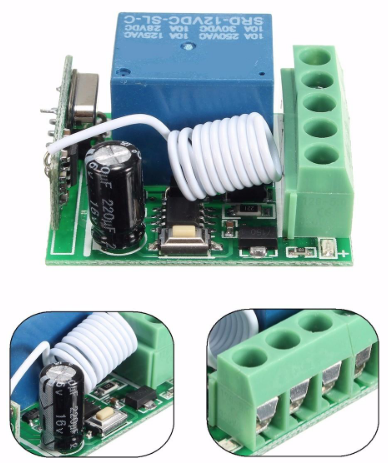 This little module takes 12VDC power. It has a 433Mhz radio module, and a relay. You can "teach" it to listen for the codes, and it will then operate the relay. You can connect any circuit through the relay, and essentially control it via the remote button.
The button came with a battery, and there are three built-in LEDs providing feedback when the button is pressed.
I tested the relay module by wiring it up as follows: 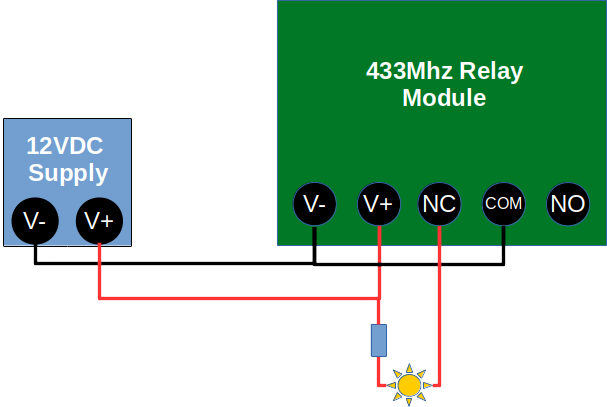 On my module, the NC (normally connected) and NO (normally open) connectors appear to be swapped. In the above circuit, the 12V supply powers the module via the V- and V+ terminals. The 12V supply also powers a LED with a 1KΩ resistor, but the resistor circuit goes through the NC and COM terminals of the relay. This means that the LED circuit is normally lit, but when the relay is triggered, the LED circuit is broken. You would normally want this connected via the "Normally Open" so that when the relay is triggered, the LED comes on, but I wired it this way for testing, so that I knew the LED was working.
On power up, there is a blue light on the relay module that blinks twice to indicate it's ready.
The mode most suitable for a doorbell is "jog mode". I configured the relay module to "learn" my push button's code, and lo and behold ... when I press the push button, the LED lights up.
So now I just need to replace the LED with the circuit for my doorbell.
At first, I tapped the 12V supply the feeds the relay module, and fed it into the doorbell via the relay's contacts. This worked ... it sounded louder than ever, until, during a stress test, it stopped working. *sigh* Nothing I did could get the bell to ring again ... 😭 I was determined to revive it, and ended up stripping it down, cleaning all the contacts ... I even rewound the copper and in the end, got it running again.
I suspect 12V may be a bit too much for the bell (the original ran off two batteries for a total of 3V). So I used a MP1484EN module to step down 12V to 5V. This is what I ended up with: 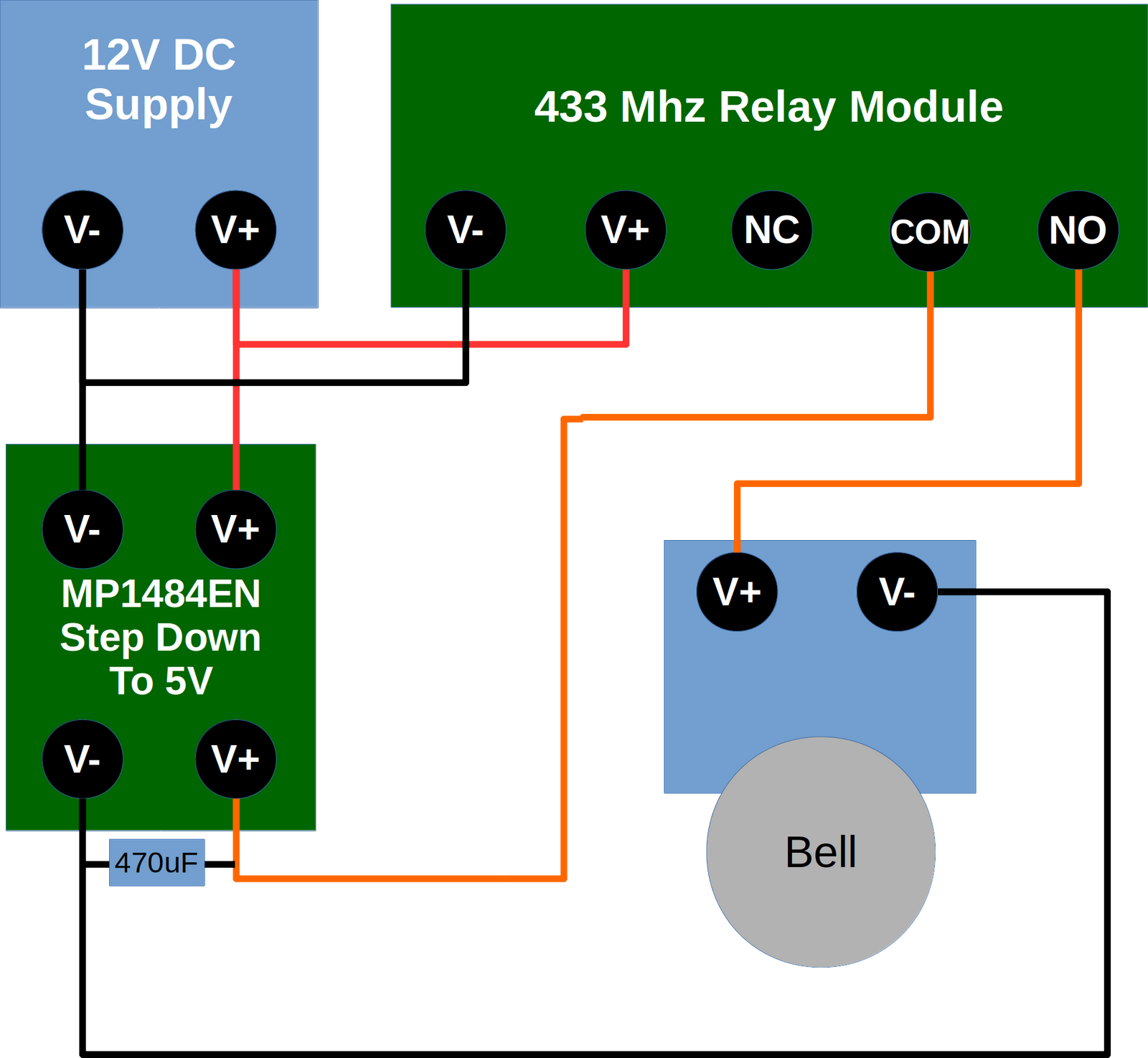 I placed the bell on my staircase mirror, as there was an existing 12V supply there for the staircase lights that is always on.
While this is fairly central to my apartment, I wasn't sure if it would be loud enough, but given that the switch is wireless, any number of receivers can pick it up. So I built a second circuit using a 5V active buzzer I had around the house. This would also serve as a backup ringer should the bell fail for whatever reason.
And it works!
comments powered by Disqus