eBooks and the State of the Things Right Now

I was in Kinokoniya recently, and came across a copy of Jeff Jarvis’s “What Would Google Do?”. I regularly watch the This Week in Google podcast featuring Leo Laporte, Gina Trapani and Jeff Jarvis, and the book’s been mentioned quite often so I was curious.

It’s been some time since I actually bought a book (and even longer since I bought a book that I actually read) and what with the end of the year coming (entailing The Hunt For Book Receipts for Income Tax Filing Purposes), I figured I’d buy it. It was only thirty something ringgit.

So I got home, settled down in the comfy sofa, got the lighting all proper, and eagerly opened the wrapper to start reading, only to discover that it was printed in the tiniest font I’ve ever seen in a printed book. It must have been like 6 point or smaller.

After getting over my rage at being “cheated” with this rubbish, and decided it wasn’t worth driving to klcc again to try and exchange the book (they didn’t have any other editions there anyway), i started thinking, “this would never happen with an e-book”. Almost all e-book readers let you adjust the size of the font, background, etc to suit your needs.

Maybe it’s time to start looking at eBooks? Perhaps this is the last “real” book I would ever buy?

Here’s what I was looking for:
* Should carry most popular titles (Jeff’s book was on all three sites, and costs a bit more than what I paid for the hard copy in Malaysia).
* Should work across many platforms, sync’d over the cloud
* Should let me buy books without major hassle
* Once I bought a book, I should be be able to read it anywhere, on any device, without having to do any special tricks.

Google’s eBooks (http://www.google.com/ebooks) was my first stop. This was just launched a few days ago, so I browsed over to it on my android phone. I got greeted by this message: “The latest Google eBooks are not available for sale in your location, yet …”. When are distributors going to realise that they’re days are numbered and they might as well quit the business while they’re still ahead?

I fired up my US OpenVPN, and tried again. This time I could browse books and purchase them. They have readers on iPad, android and also the web, so as far as cross platform usage goes, it seems to be quite well covered. Once you buy a book it can be accessed by any of these devices, and will also be sync’ed properly when you login on a new device. There were some samples that you could download first, so I tried getting one via the web page, and it was inserted to my bookshelf.

Unfortunately, when I tried to access it on another PC (without the VPN), the books failed to open, and the page just redirects out of there. Which means Google not only won’t sell the book to you outside the US (fair enough), it also won’t let you read a book you bought in the US when you’re outside the US. How does that work for US travellers then, they lose their books when they’re travelling, which is when they need it the most. I can’t expect to run a VPN every time I want to read a book, so … FAIL.

Apple’s iBook Store. Apple, seems to not be as paranoid as others when it comes to distribution rights. You have to have a US account to buy content (fair enough, since their distribution rights cover the US only usually) but once you’ve fooled them over that part, they don’t really care where you are physically to access the content. Which I think is a really fair policy. I believe the content is sync’d to your device, so once there, you can even be offline to read it. I tried some sample books on the iPad, and while the display isn’t the sharpest (due to the large size) it was pretty passable. You can adjust font size, and so on.

Unfortunately, the iPad gets pretty heavy to read a book on after a few minutes. And given that it’s the Apple book store, I doubt if they will be releasing the iBooks apps for other platforms. Which means the only way I can read my ebook is at night, after Alia has gone to sleep, as it’s her “toy” by day. So … FAIL.

Amazon’s Kindle started off as a hardware platform, but they’ve now released it as software on other platforms. The new app is quite nice, and runs pretty much everywhere, from apple iphones and ipads, androids, even blackberry’s. I fired up my VPN and went over to amazon.com (yeah, they won’t let you buy outside the US either), and logged in with my US account. The fact that amazon also sells real books makes it easy to read reviews and feedback about the book, and also compare prices between the ebook and the real thing (e-book is more expensive, but that’s not considering shipping yet).

You can get a “sample” of some books, so I tried that. Amazon’s website offers to “deliver to shahada’s nexus one” as I had already installed the android app on my phone (still, spooky seeing that on amazon.com). There’s no push service to wake your phone up, but when you open the Kindle app on your phone the new book is there, ready for reading. Your device can be anywhere in the world, they don’t seem to check your location when reading.

The only downside is that you need a US account and funds to buy from Amazon.com, and also run a VPN during time of purchase; right now you can do this buy buying a gift card with your regular account and sending that to an account you create with a US address. Similar to the hassle of buying music content on Amazon MP3.

There appears to be an extra charge to download books to your kindle device (versus downloading it to your PC and moving it over) … I’m not sure how this applies to other devices with kindle software. Needs more exploring. So far — Passable.

My Nexus one was a bit small to read from, I think something with a bigger screen (but not as heavy as the iPad) like the Galaxy Tab would be perfect. Actually, a Galaxy Tab -sized device with an AMOLED screen (the current one is regular LCD) would be excellent. If Samsung does one next year, I may even ignore the word Samsung on it and buy one.

There is of course the fourth option … just google for “What would google do PDF” and download a pirated PDF copy. You can then read it anywhere as almost anything has a PDF reader; in fact the one on my Nexus one can even reflow the text to suit the page size, similar to a “proper” ebook. Hmm …

Conclusion: since I’ve already bought that stupid paper book, I do have some arguable “right” to read the pirated PDF … 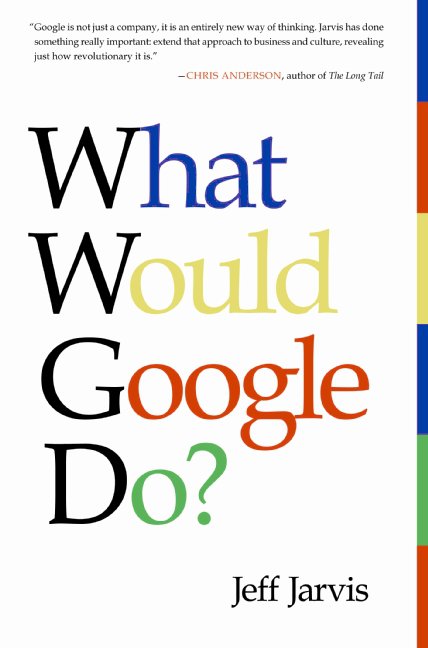