My Synology DS918+ has two Seagate Ironwolf NAS 6TB drives in it, currently configured in a Storage Pool. With two drives, one is essentially a mirror of the other, so the total storage available is only 6TB. Well 5TB if you "count" the way hard drive manufacturers do.
It's now time to add to this storage. I called C-Zone at PJ Digital Mall and was told they had the drive in stock. Unfortunately, when I got there, it turns out there was a mix up and they didn't have actually have them there, only in their Lowyatt Plaza branch. Which meant a drive into the city.
In the rain.

Fortunately it was a Sunday so there weren't too many cars on the road. In the end I managed to get my hands on another Seagate Ironwolf NAS 6TB drive.

I started by pulling out the empty caddy for slot #3. Then a small flat screwdriver was used to prise off the panels at the side. 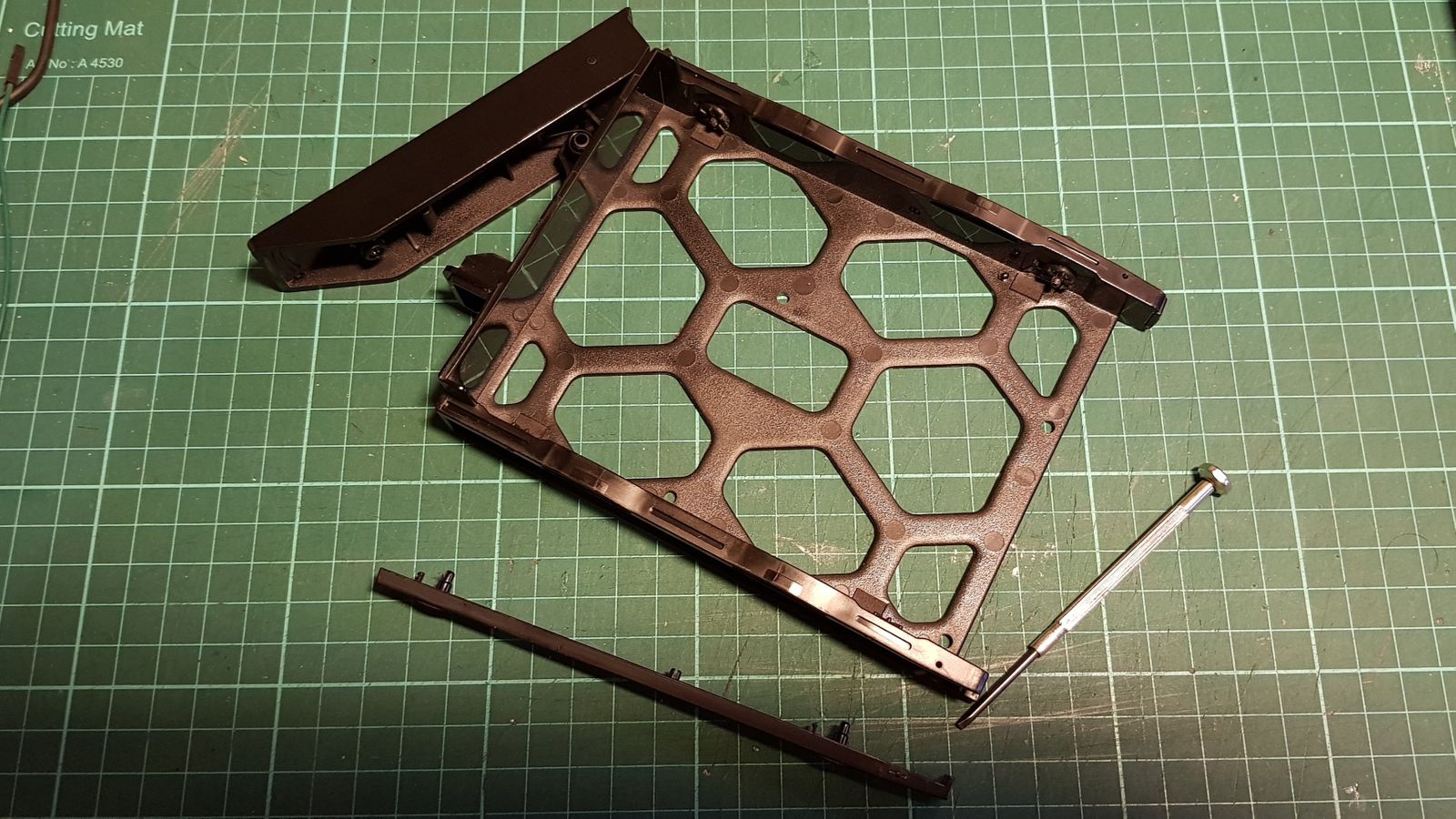 The new drive then is placed in the caddy, with the holes aligned, and then the panels at the side are pushed in until they lie flat on the sides. 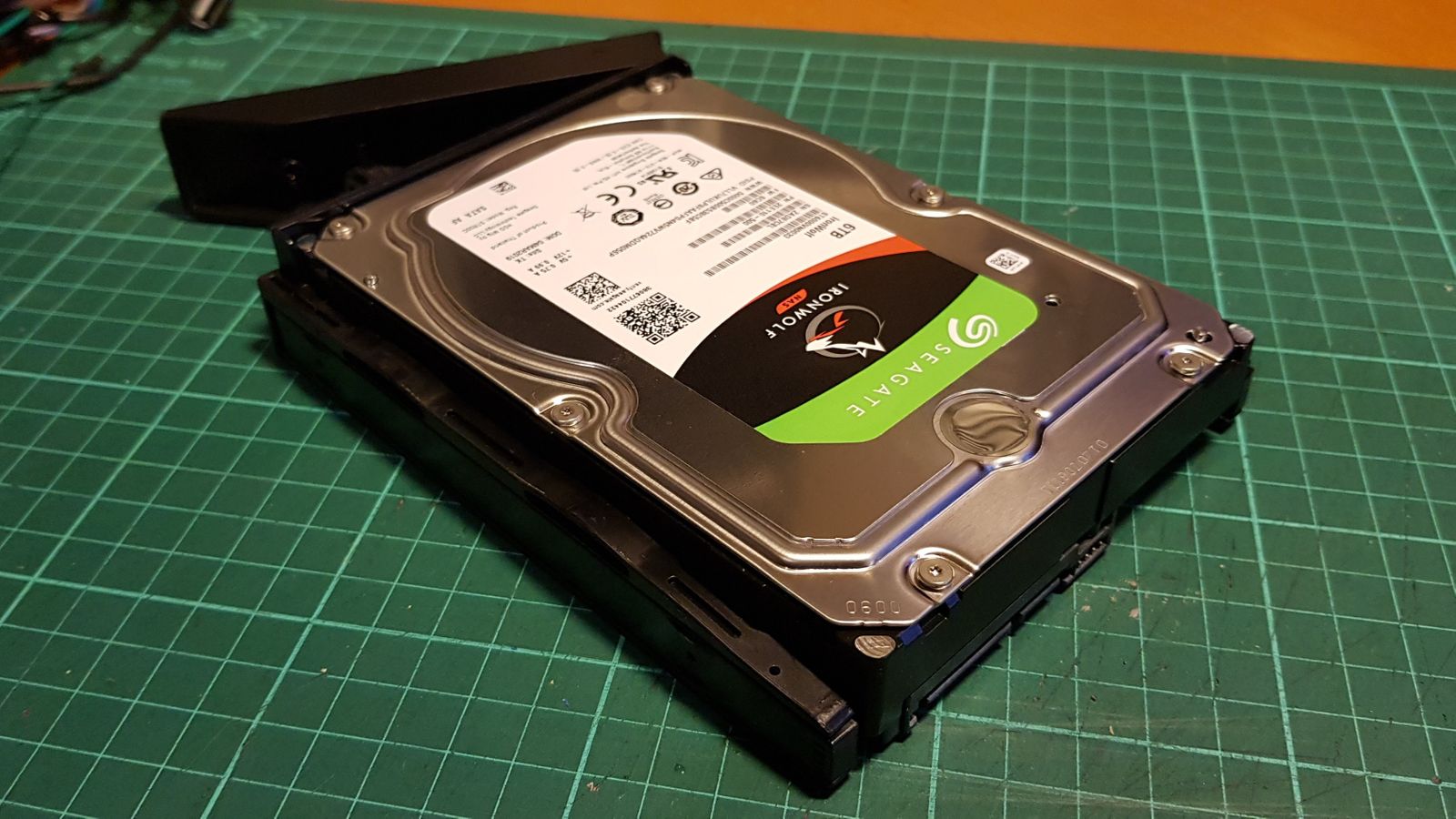 The caddy then slides back into the slot, going all the way in until the SATA connectors mate. 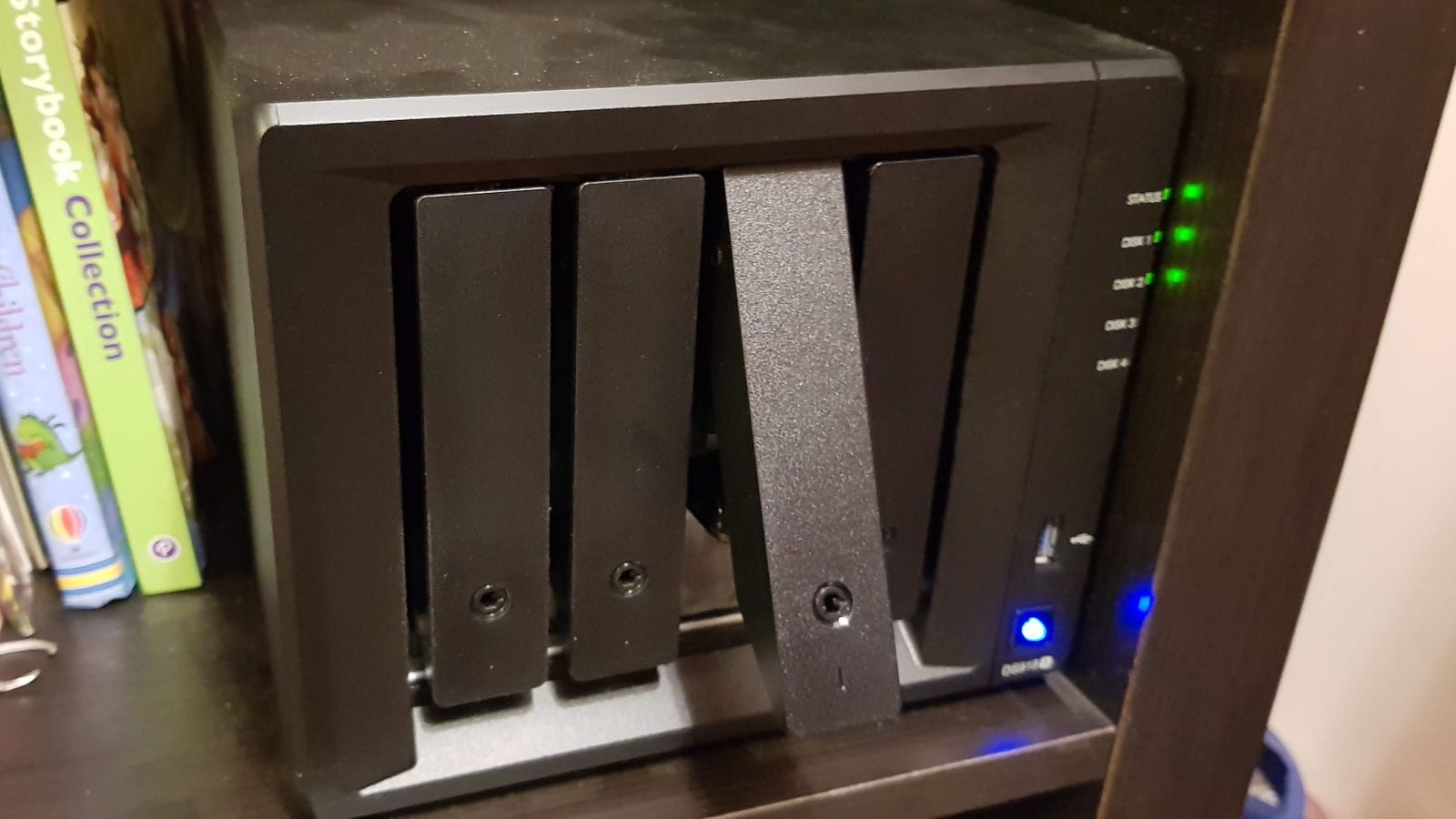 It takes about 20-30 seconds for the drive to power up and be recognized by the system, at which point the DISK 3 LED lights up. 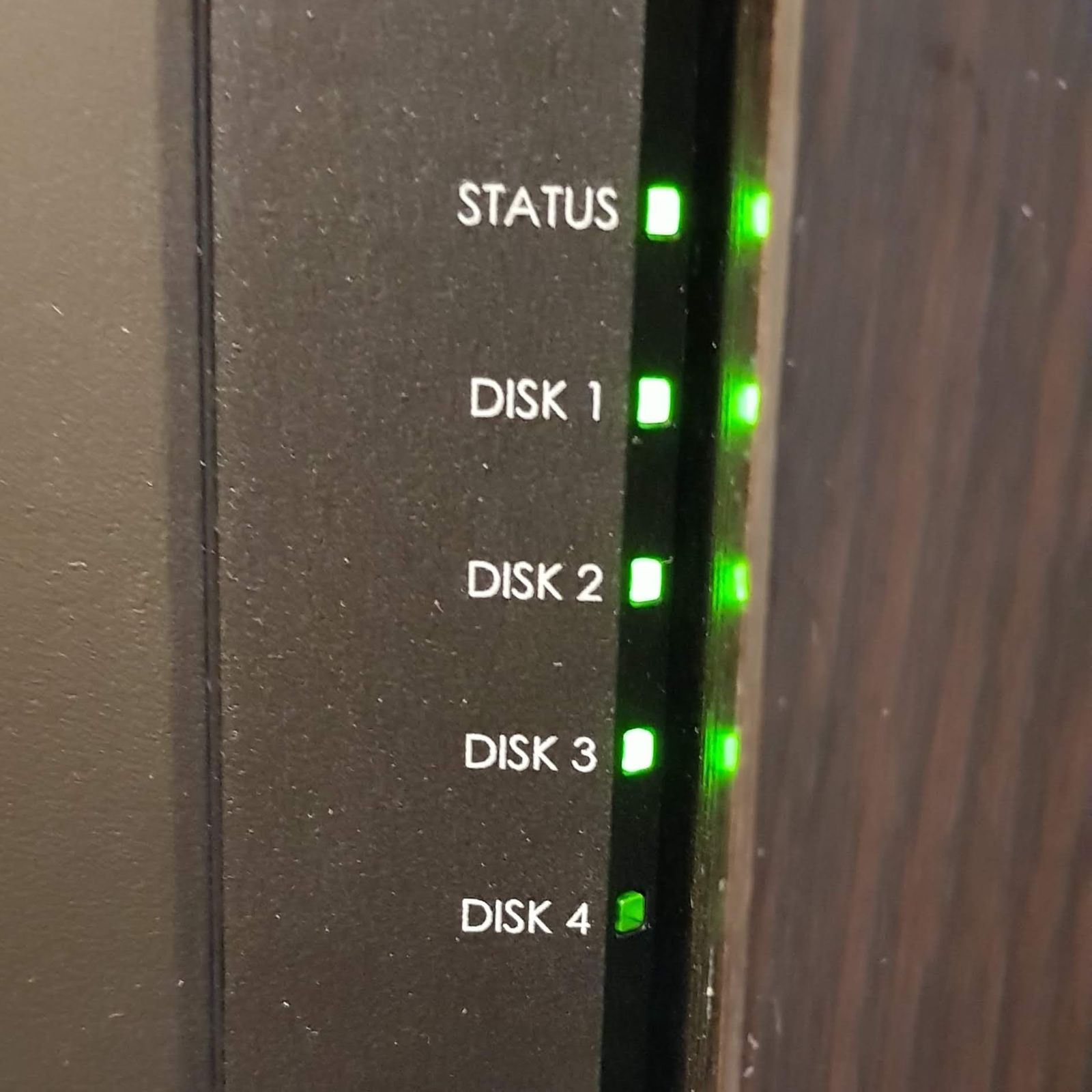 Adding the Drive to the Storage Pool
Logging into the NAS and firing up the Storage Manager's HDD/SSD screen shows that Drive 3 is recognized but "Not Initialized".

To add the drive, I selected the Storage Pool screen and selected "Add Drive" from the Action button-menu:

Then choose the new "Drive 3" and press Next:

And we're returned to the Storage Pool screen. There's a moving symbol at the four squares to indicate it's busy doing stuff. The Drive first changes from "Not Initialized" and then to "Normal", after which the Storage Pool is Expanded to encompass the new drive. This process can take a long time as it has to recalculate the parity bits across the 3 drives.

The existing data on the volume is still available while it's going through this process, although access speed is reduced. I was still able to stream HD video from my Plex server running on the NAS without any issues (4K would end up buffering every 20 seconds or so), although putting any load on the NAS may slow down the time it takes to expand the Storage Pool. I estimate that it took around 36 hours for my three 6TB Ironwolf NAS drives.
After that, the Storage pool had a capacity of 11TB: 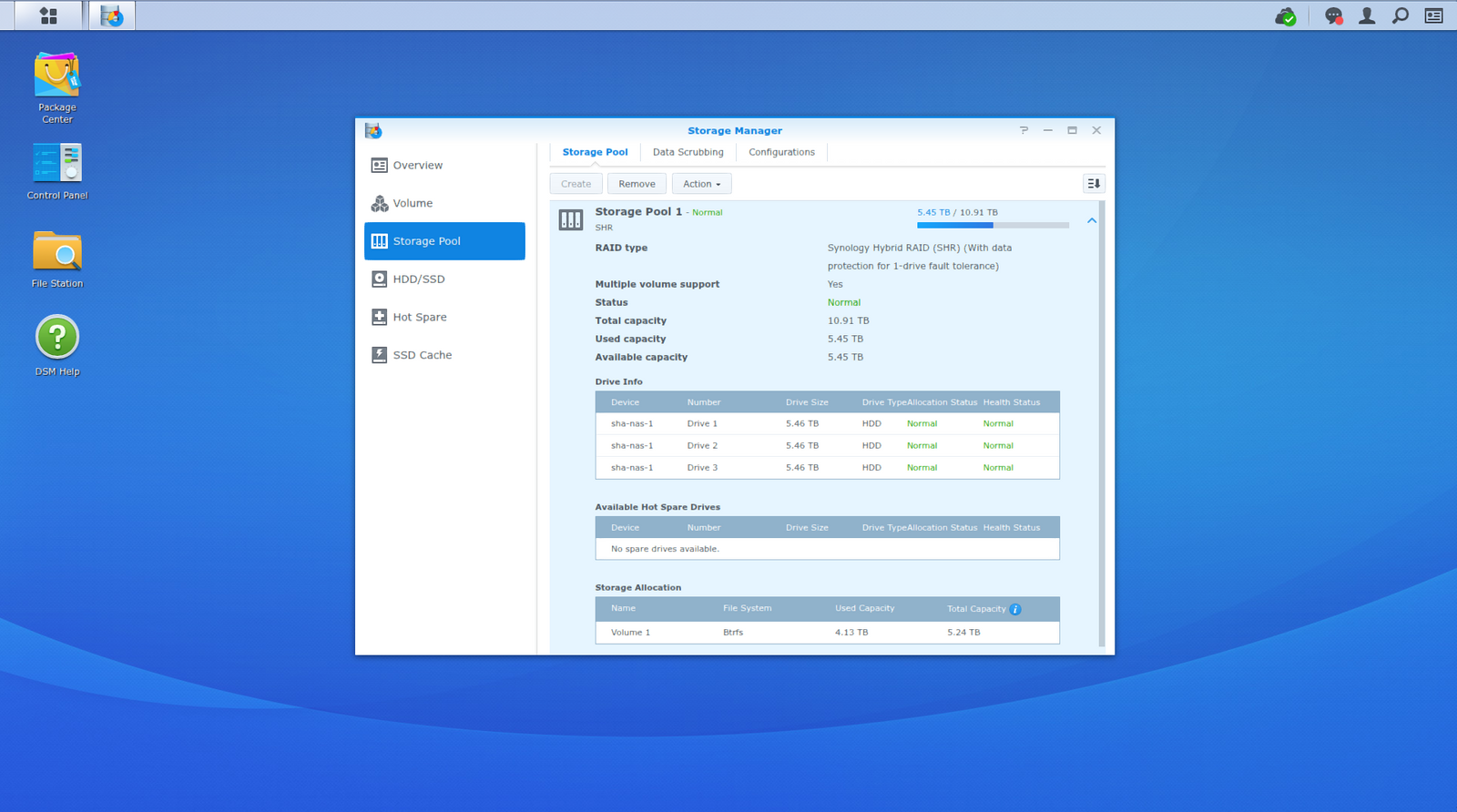 The Volume is still using only the initial 5.24TB of space, however: 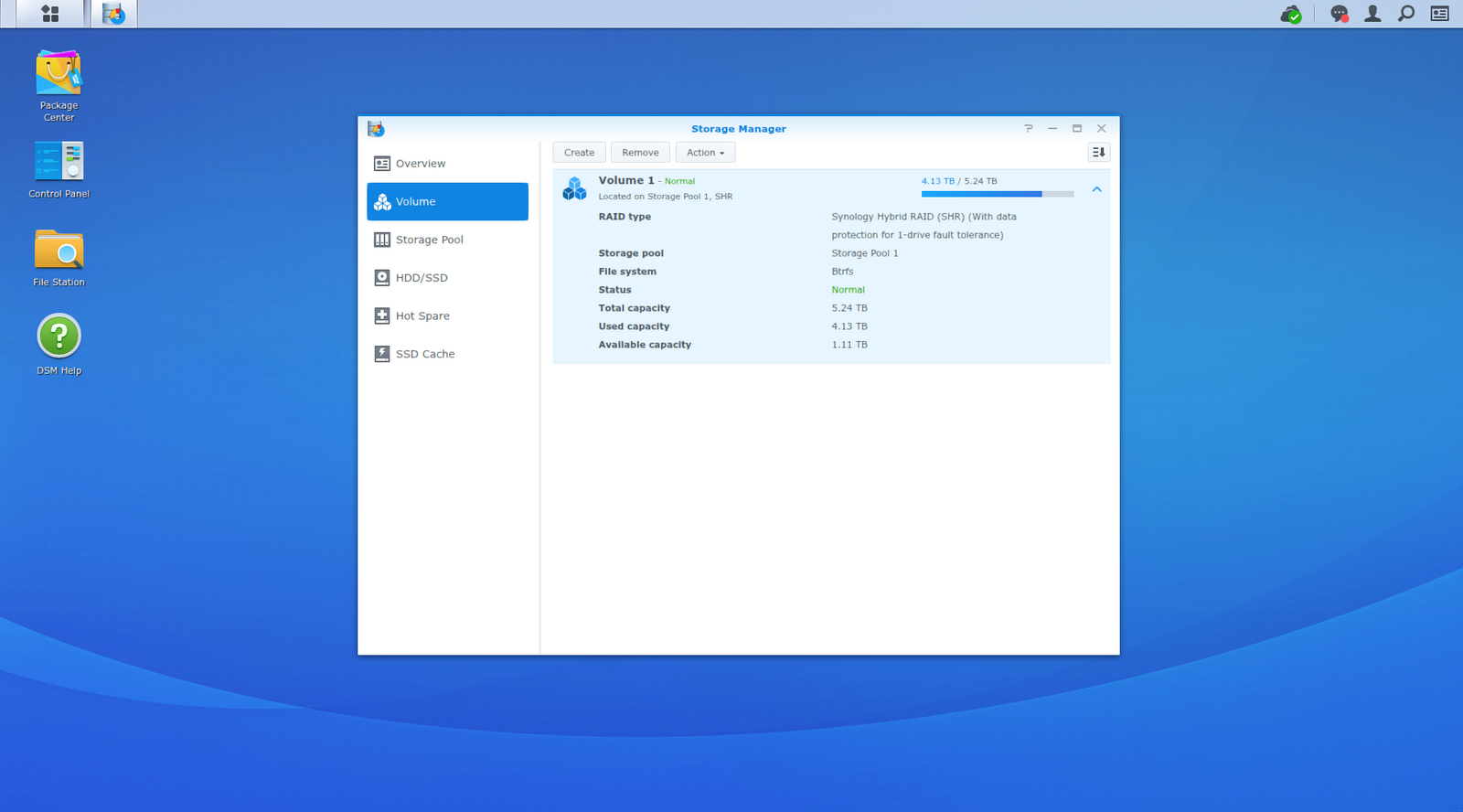 The last step is to select "Volume 1" in the Volume screen, then choose "Configure" from the "Actions" menu. Click the "Max" button next to the "Modify allocated size" field, and press OK: 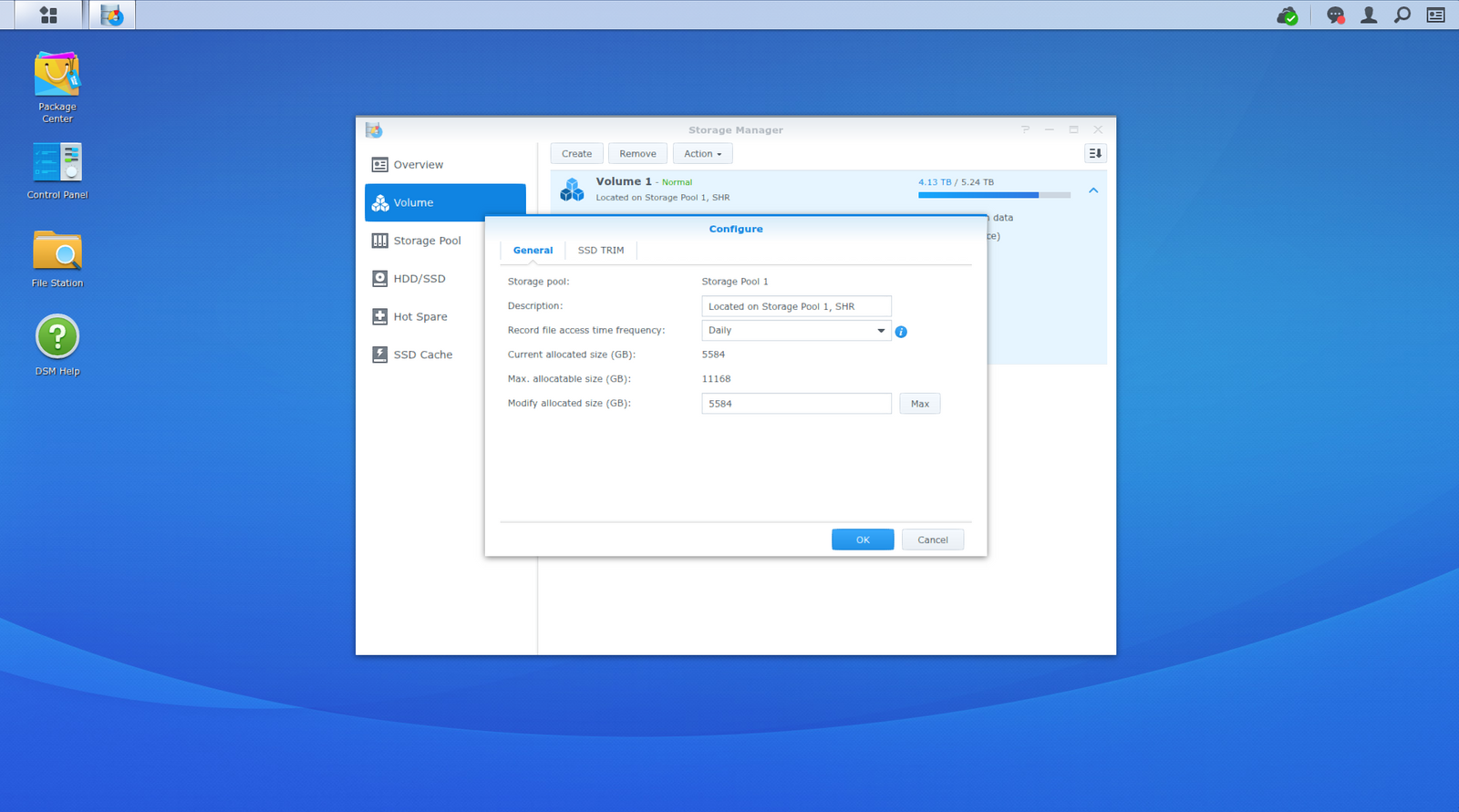 The NAS then starts expanding the file system to use all the available space in the Storage Pool. This took about 15 seconds, and finally: 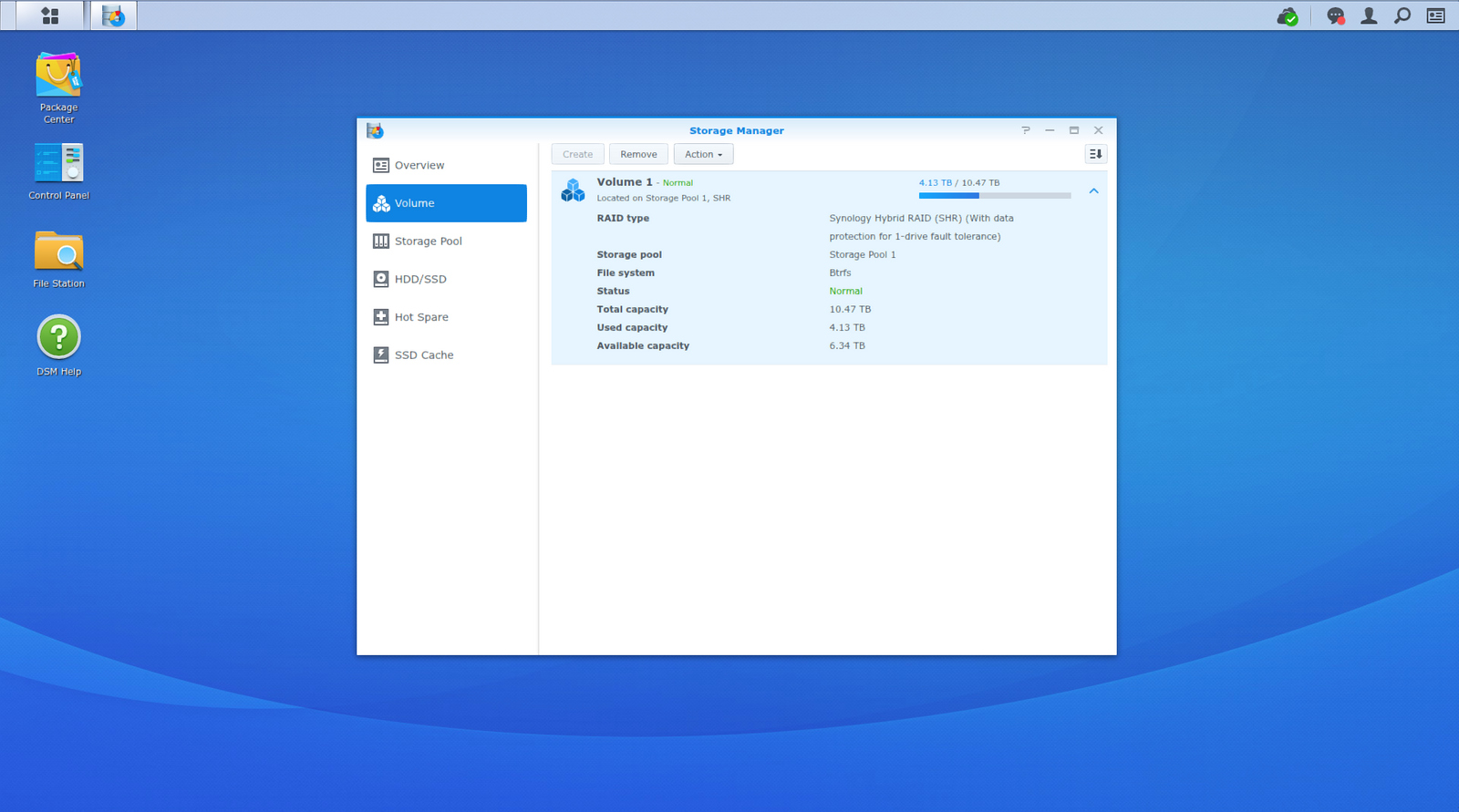 And that's all there is to it.
The DSM UI on the Synology NAS makes expanding the storage an absolute doddle compared to using mdadm on a PC-based linux system. My ideal setup is now to use just SSDs for fast storage within the PC, and store everything else on the NAS. Of course you need wired gigabit networking connecting everything together, but for most desktop PCs this is not an issue. Hopefully this allows me to reduce the size of my desktop PCs eventually.
Gadgets, Synology
comments powered by Disqus