I’m a judge in the Android Developer Challenge 2! The ADC2 is a contest run by Google to encourage cool apps for the android platform. With prizes of up to USD100,000 for each of the ten categories, some developers may feel it would be easier to get rich by winning a prize rather than selling 100,000 copies of their app at USD1 on the Android Market.

How did I get “appointed” to be a judge? Well … nothing much lah. Part of the judging is open to the public, and you participate by downloading the Android Developer Challenge 2 app from the Android Market. This app manages the “judging workflow” for you.

When an app is ready to be reviewed, you will get a notification on your phone:

You will then be shown the title of the app to be reviewed, and some description of the app. You have a choice to review it or skip it (found this “skip” option after going through about 5 or so really boring apps). 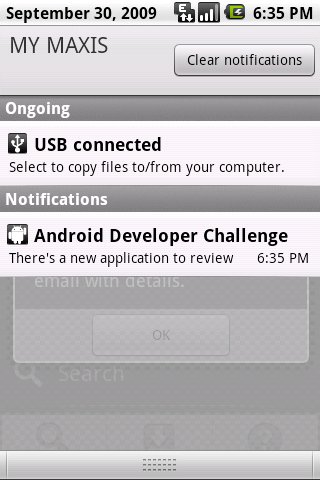