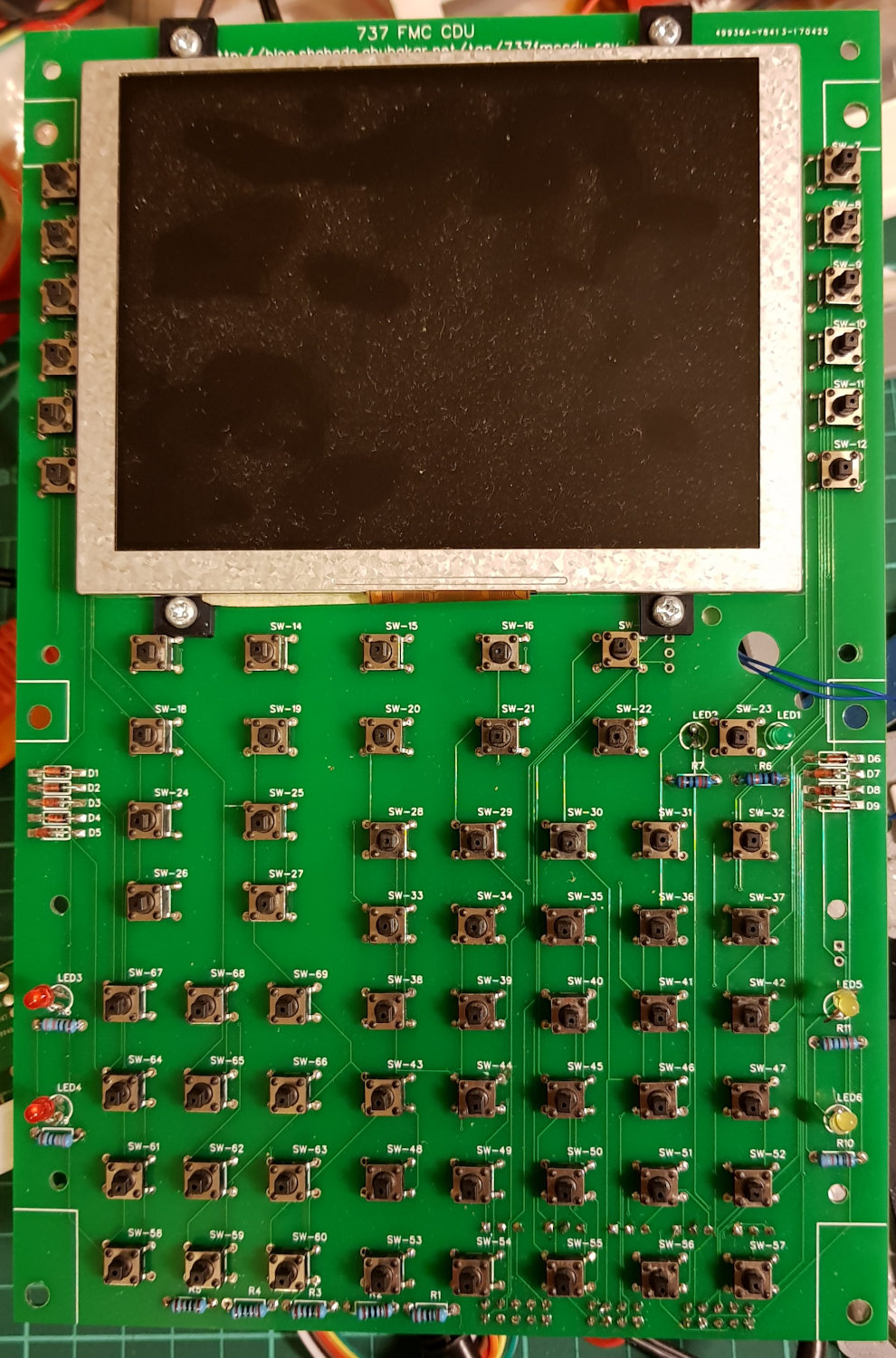 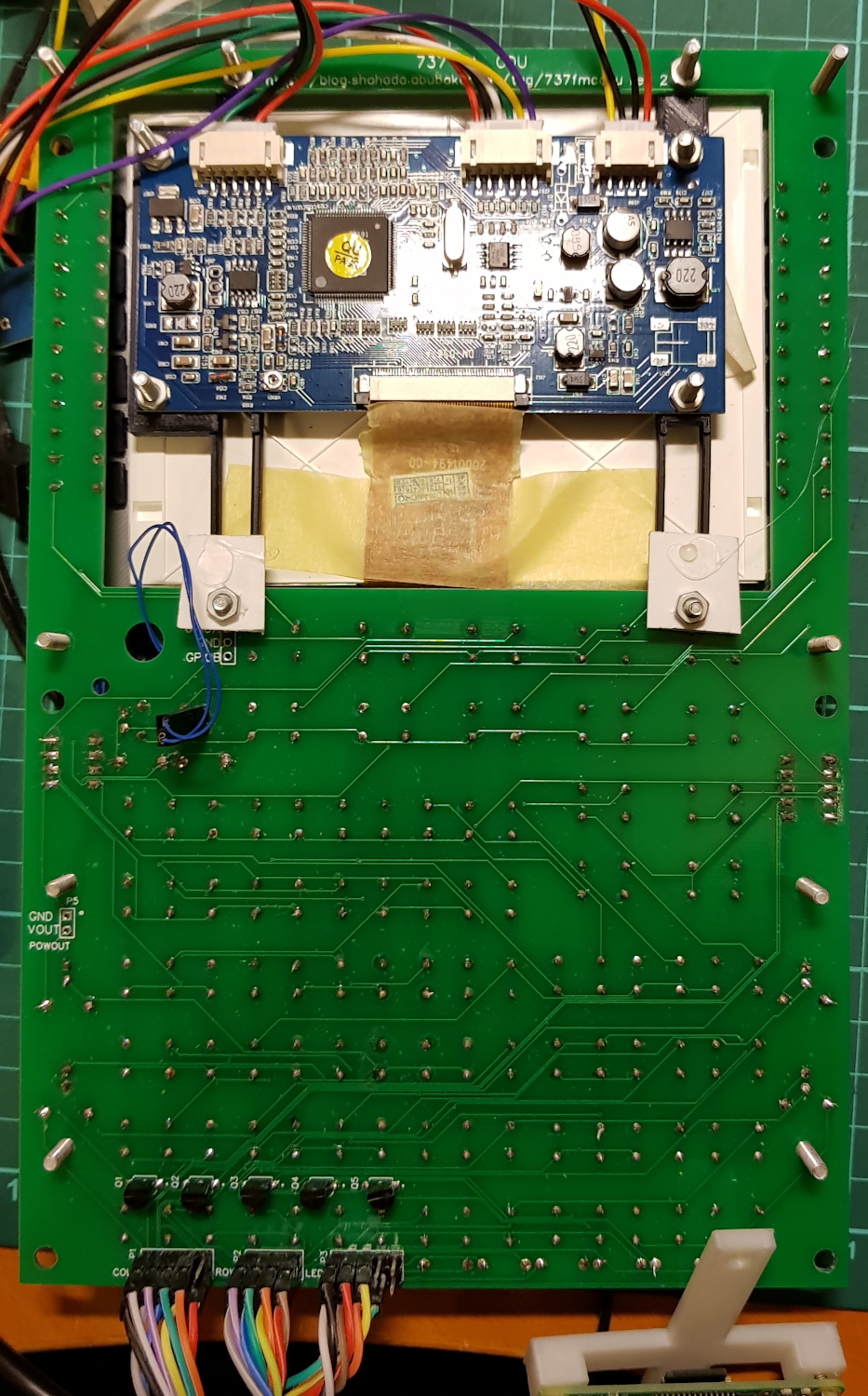 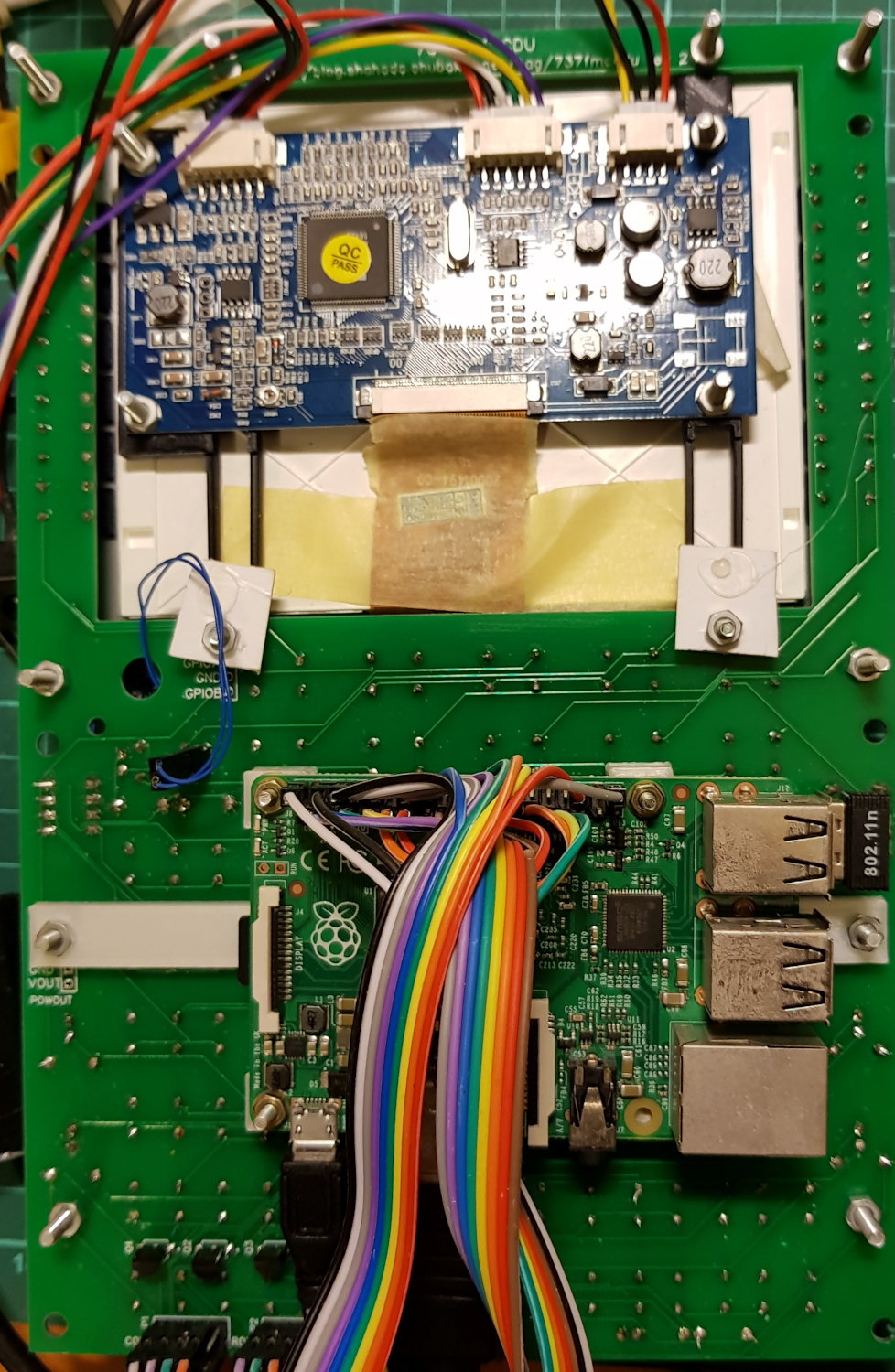 Rear with Pi Mounted
* you also mention that the LED for “ofst” is wired backward and that the cathode/longer leg should be toward the bottom of board. I believe that the longer leg is always anode and NOT CATHODE
* You also said that “for all other LEDs, the cathode/longer leg is toward the top of the board…I believe that there is no change to the other LEDs and they are good except for the “ofst LED” that needs to be soldered backward? Am I right?
You are probably right on the cathode vs anode vs long vs short. My electronics skills are more at the if-it-doesn’t-work-this-way-turn-it-the-other-way-around level when it comes to LEDs. If you look at the logical schematic at https://goo.gl/myzxWM you’ll see that all the LEDs point the same direction except for OFST one which I had wired backwards in the schematic by mistake.  When I laid out the PCB I got them all pointing the same way; but in reality the OFST LED’s connections are backwards, so to make it work the LED needs to be soldered on in reverse.
Note: These bugs affect the 2.0 revision of the board. The 2.1 revision should have the correct markings.
* where and how did you get the FMC plates with switches? Online or DIY too?
The faceplate was 3D printed from a design off Thingiverse. The details are on an earlier post (or just click on the “737 fmc” in the Categories on the Left and scroll down (so you can skip over my other unrelated posts). The keybuttons are from the same Thingiverse post too I think.
The designer who did the faceplate design has a link to the switches (and display) on the thingiverse page, if you’re in Europe these may be faster to source from. I found a similar one on eBay which was cheaper for me (search for “100Pcs Square Head 6x6x7.3 mm Tact Tactile Push Button Momentary PCB Switch”; here’s a link that works currently). The holes on the PCB are designed for the eBay one, but from the design schematics I believe they’re the same.
Overall I’m not too happy with these switches as the actuator is thin and tall … it’s meant to fit into a corresponding hole at the bottom of the buttons. But I found it quite hard to print the buttons with the holes perfectly. It could just be that I’m printing them wrong, but In the end I removed the holes and left the bottom of the buttons flat. They still press against the actuator just fine once you level the faceplate against the PCB properly, but because the actuator is thin and tall the button presses feel slightly wobbly.
I’ll revisit this at some point with a different design of switches that have a built-in LED so the keys can light up … that will need a new PCB layout. I’ve promised myself to actually complete the other projects (overhead panel, throttle quadrant) before starting on an upgrade of anything though … 😎
* What size Current Limiting Resistors Should I Use?
Resistors R1 – R5 are current limiting resistors for the GPIO signal feeding into the transistors. I used 1KΩ resistors. This should be fine for 3.3V GPIO (Raspberry Pi) and also 5V GPIO (Arduino).
Resistors R6-R9 are current limiting resistors for the LEDs. I used 330Ω resistors — but this depends on the voltage input (VIN) you supply to power the LEDs (the keypad side of it doesn’t use this voltage input, so it is purely to drive the LEDs) and also on your LEDs. 330ohm is the lazy-person’s-choice of resistor for use with LEDs, and is safe if you supply VIN from the Raspberry PI’s 5V output pin. If you want them slightly brighter, do calculate the appropriate limits based on your LEDs specifications and the VIN you supply.