I’ve been stumped for the last few weeks with getting my Raspberry Pi FMC to work with Zibo’s 737. I used the ExtPlane plugin to interface my code on the Pi with the simulator, and it works well for almost all FMCs except Zibo’s. The symptoms would be missing or truncated data updates, causing the screen on the Pi to get messed up.
Since I’m only working on the Pi end, it’s hard to tell whether the problem is with ExtPlane or Zibo. The AirFMC iPad app, which comes with its own plugin, is able to replicate the Zibo screen without any issues, so I thought I should try to write a plugin to access the Zibo datarefs and see what that looks like. If so, then I could probably extend that data to the network and have my Pi code get to the data.
So the first stop is to download the X-Plane SDK’s Hello World plugin. This comes in three flavours: an XCode one for Mac OSX, a Visual Studio 2010 version for windows, and a GCC Linux version. I grabbed the Linux version, as that’s what I run on my development PC (I also have an X-Plane install here for testing stuff like this). The Linux version is the easiest to build as you just have to run make (the SDK is embedded in the example). It compiled the example C program and linked it against the SDK, and built a shared library under Hello-World-SDK-3 called lin.xpl. I symlinked the Hello-World-SDK-3 folder into X-Plane’s Resources/plugins folder, and started up X-Plane, and got this: 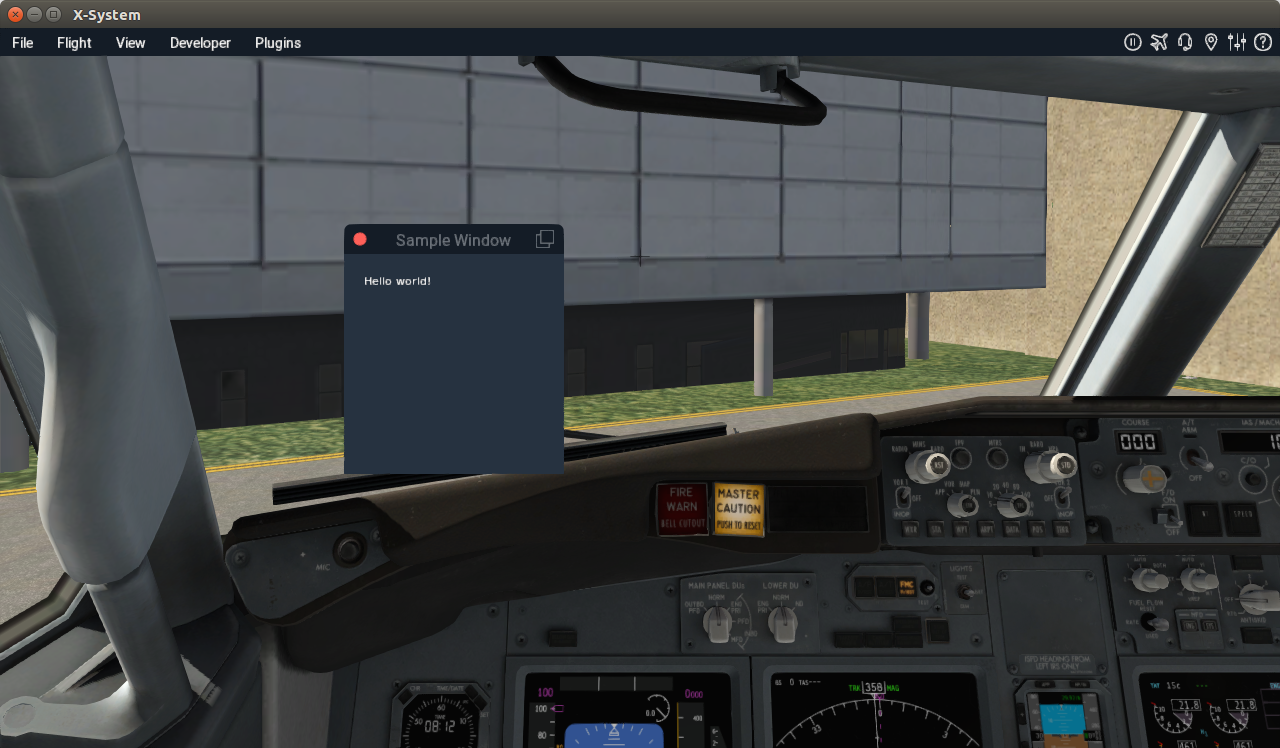 Analyzing Hello-World-SDK-3.cpp
Let’s take a look at the Hello-World-SDK-3.cpp …
Each plugin is required to declared the following five C functions:
On it’s own, other than declaring stuff, the plugin doesn’t get to do anything much, unless it registers callbacks to itself. It is in the callback that the plugin gets to “do its thing”. For example, in the case of Hello-World-SDK3, when the window is created, a list of callbacks are specified which trigger when the following happen:
Most of these are set to a dummy handler, except for the draw window function, in which Hello-World-SDK-3 writes “Hello World” within the window.
There are many other ways that a plugin can register a callback, depending on what is needed. A common callback used for plugins that need to do stuff regularly is to use the XPLMProcessing API, where callbacks can be tied into X-Plane’s flight loop.
Adding “GOT HERE”
The next thing i did was add #include <stdio.h> at the top of Hello-World-SDK3, and sprinked some printfs around the existing functions and callbacks. I then recompiled the plugin and launched X-Plane from a terminal. This gave me some confidence that I could trace the plugin and get output, and also some idea of when each callback is called.
Interestingly, the drawWindow function got called, even when the simulator was still at the main menu.
So what’s the difference between Start and Disable? Start is more for declaring resources your plugin provides, and enable is more for making use of resources that other plugins or the sim provides. This way, there is less chance of requiring a resource that hasn’t been declared yet.
I only got XPluginDisable() and XPluginStop() calls when X-Plane was shutdown. Incidentally, I saw two calls to XPluginReceiveMessage() … so this is probably something that should be looked at.
Adding a Processing Callback
Let’s modify Hello-World-SDK3 to have a Processing callback. First we need to include the appropriate headers with a
#include “XPLMProcessing.h”.
Then I added a function that will be called every 1 second:
This is then registered inside the XPluginEnable() function with:
And deregistered inside XPLuginDisable() function with:
Now when X-Plane is run I get this output every 1 second:
Note that this only starts when the sim is running proper i.e. it is not called when at the X-Plane menu.Â
Fetching a Dataref
Next, let’s see if we can fetch a dataref inside our flight_loop_callback.
It seems that you have to poll regularly to get the value of a dataref … there is no way to do a callback when a dataref changes value (Unless it is a “shared” dataref. I”m not sure if Zibo’s datarefs are shared or not, so lets assume it’s owned by the zibo plugin).
Also to access datarefs, you have to call XPLMFindDataRef with the dataref string. This then returns a XPLMDataRef, which can then be interrogated at any time to get the value of the dataref.
So coming back to our hacked-up Hello-World-SDK-3 code, we add in the header for data access:
We also declare a global to hold the dataref:
In the enable method, I added some code to find a dataref (one I was struggling with on ExtPlane/Zibo):
Now in our flight_loop_callback, let’s get the value of this dataref:
When I first ran this … it couldn’t find the dataref. The reason for this that zibo’s FMC is an aircraft plugin, which means it is initialized when the aircraft is first loaded. However, Hello-World-SDK3 is a global plugin, and gets loaded way before that. Therefore, Zibo’s plugins aren’t available during the time the Hello-World-SDK3’s XPluginEnable method is called.
I modified it by moving the above code into flight_loop_callback():
Now, when the aircraft loads and the sim proper starts, I get:
and after fiddling with the FMC:
Interestingly, my parallel ExtPlane session returned:
So it seems there’s some weirdness going on in ExtPlane, which is affecting my FMC.
Anyway, I removed the window drawing parts and just left my changes in the plugin, and the source can be found here.
I’ve not decided which way to go next; whether to use what I’ve learnt here and start debugging ExtPlane to see what’s going wrong; or … start writing my own plugin for the FMC.  Writing my own plugin would be the more educational route, although I would probably end up replicating most of ExtPlane.
Checklist of stuff to learn to be able to write my own “dataref accessor” plugin: