New Toy: Unicomp SpaceSaver PC KeyboardOk, I’ll admit it … I messed up my IBM Model M keyboard while cleaning it a few months back. Somehow the keyswitch for the “End” key stopped working. You will not realise how much you use the End key in real life until it’s gone. It’s probably fixable, but not with my current tech-karma levels…

So despite the expensive shipping costs, I went and plonked out some money for the Unicomp SpaceSaver PC Keyboard (http://pckeyboards.stores.yahoo.net/en104bl.html). Unicomp bought over the rights to manufacture the IBM Model M keyboard, and their current range incorporates the classic Buckling Spring technology (http://en.wikipedia.org/wiki/Buckling_spring) that gives these keyboards their clicky feedback.

I went for the black, spacesaver, USB model. It arrived in a few weeks, I plugged it in, and everything works. Here’s my feedback:

* The click feel is slightly different than my previous Model M. The keys feel slightly less stiff, which is a good thing. Actually, judging by the sound of the various Model M videos on youtube, I think there are some variations between different Model Ms, as this feels more like the PS/2 Keyboard I first got to use and fell in love with years ago. I feel that I can type faster on this than with my Model M, as my fingers can glide around the keyboard better due to needing less pressure to hit the keys, yet still get the useful feedback of hitting the right keys.

* If you need USB, then this is about your only choice. Original Model Ms come with either PC/AT or PS/2 interfaces. I was quite limited in my choices of motherboards as I needed a PS/2 port to use the keyboard with. And Model Ms don’t work too well with PS/2-to-USB converters, something about drawing more power than your typical PS/2 clone keyboard. Eventually (already?) you’re going to need a USB keyboard.

* The internals of this unicomp keyboard are pretty similar to the original Model M, it has the metal backplate, removable keycaps, and so on, that make it quite weighty and gives it a solid feel. The same however can’t be said about the external casing — maybe it’s the fact I ordered a black one, I don’t know — but the plastic feels rather cheap, and there’s a slight plasticky creak at the lower edge. It’s still way better than any cheap plastic keyboard you can buy out there, but it’s in no way mistakeable for the original IBM Model M.

* Unlike the original Model M, this has a Windows key. The lack of which didn’t use to bug me before, but Ubuntu’s new Unity interface uses it as a shortcut to call up a quick launcher, which is quite useful.

* It’s a clicky keyboard. If you love that, this’ll do the job. It’s then a question of whether you get a refurbished Model M over on ebay or http://www.clickykeyboards.com/, and spend time dealing with converter issues (even the one endorsed by clickeykeyboards gave me intermittent problems) and do without a Windows Key, or you get this. If you abhor the noise it makes (and I can see how it would irritate people) then it’s not for you.

I did think of the idea of getting a Unicomp and transplanting the internals into my old Model M casing, but apparently it won’t fit. Might be achievable with some mods but not something I’d try unless I had a few to spare. 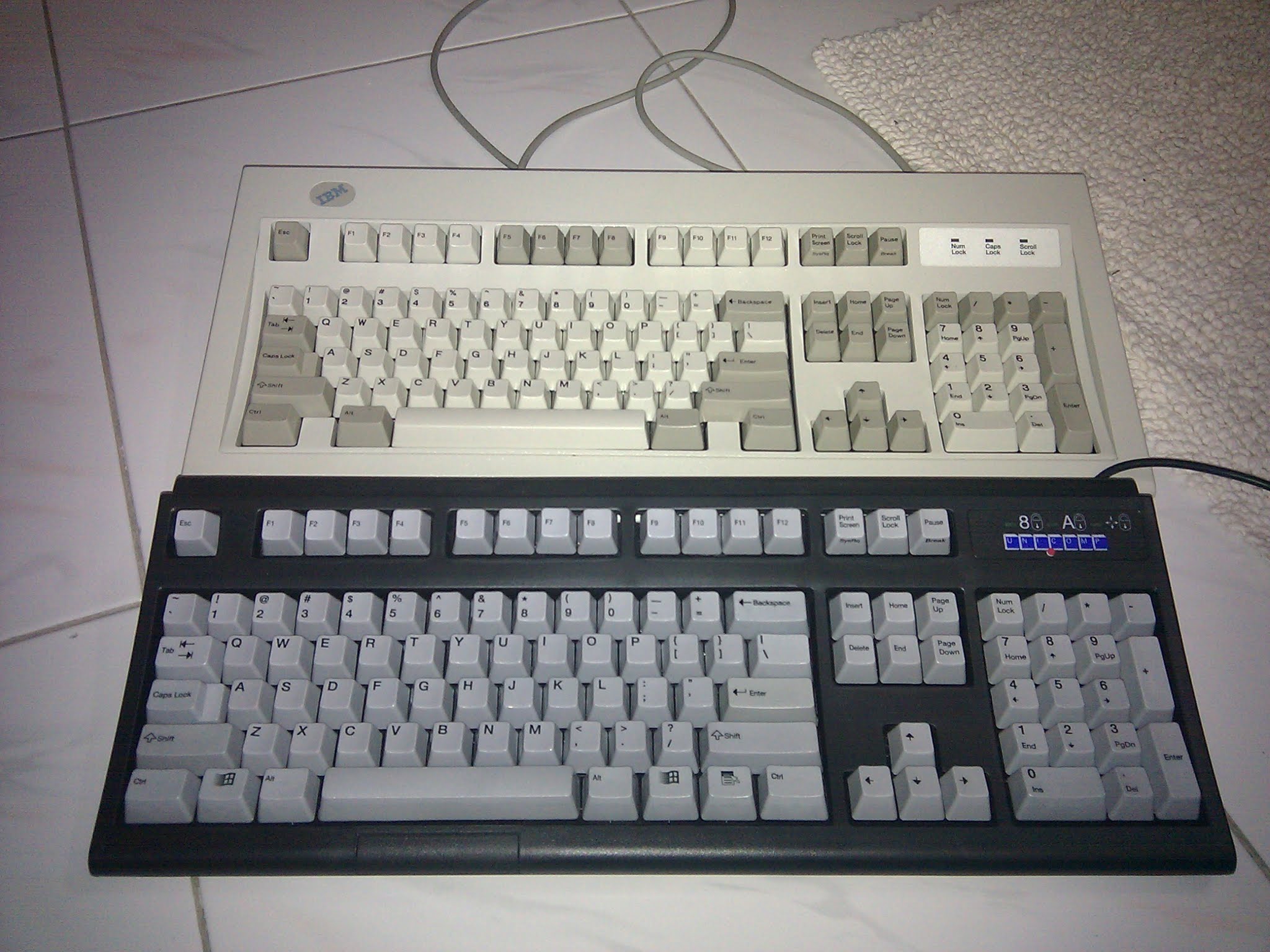 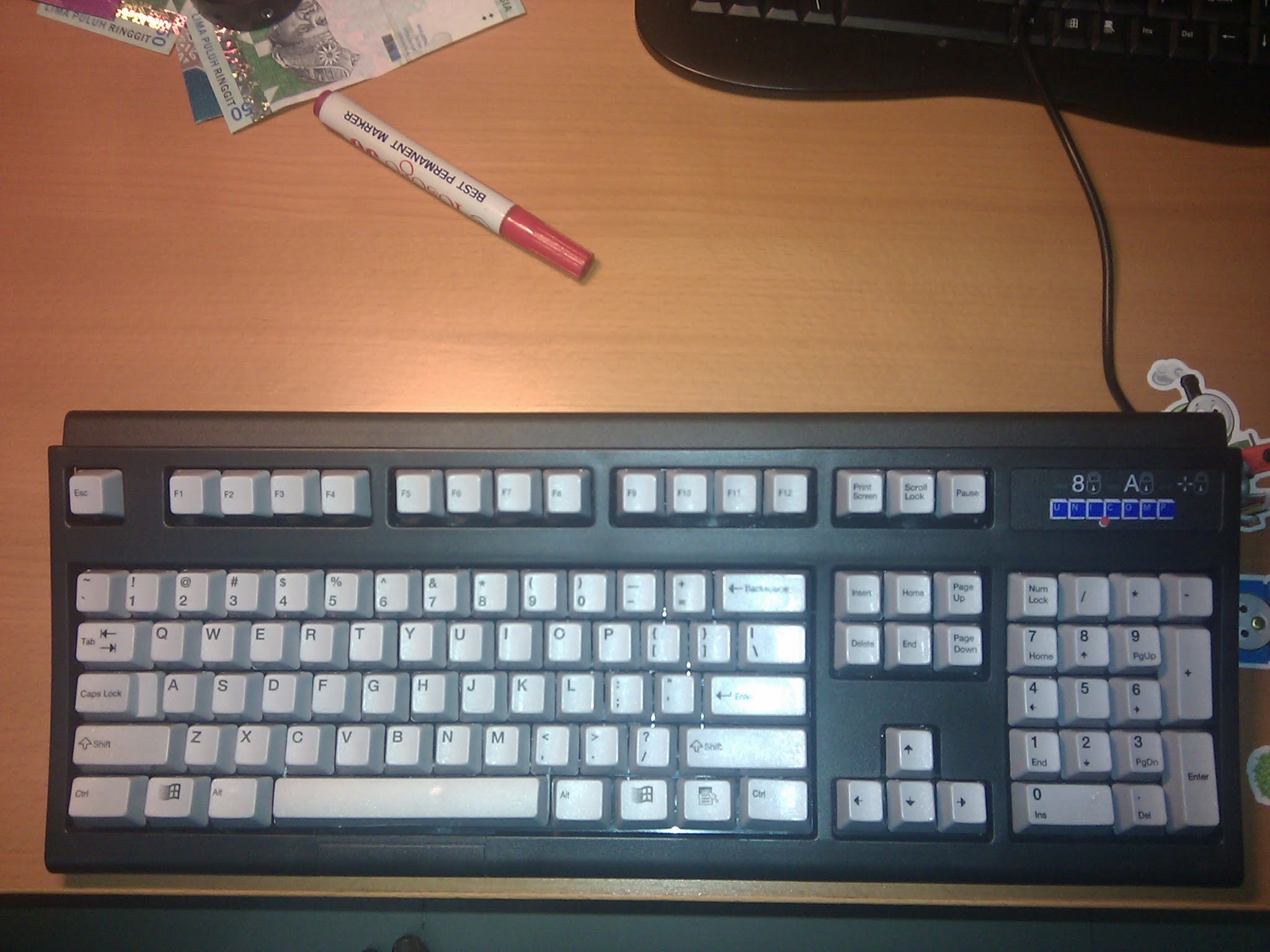